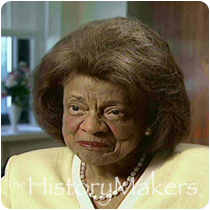 See how Ernesta G. Procope is related to other HistoryMakers
Donate Now

Investment banker Ernesta G. Procope was born in Brooklyn, New York. During her early childhood, Procope studied piano and at age 13 appeared at Carnegie Hall showing early promise as a piano prodigy. By the time she had graduated high school in the 1940s, Procope’s interests had shifted from music to real estate and insurance. In 1953, she founded E.G. Bowman, a private insurance company that offered insurance to the residents of the predominantly African American Bedford-Stuyvesant section of Brooklyn, New York.

Serving as president and chief executive officer, Procope made history in 1979 when she relocated her business from its Brooklyn storefront to 97 Wall Street. The E.G. Bowman Company became the first African American-owned business to be located on Wall Street. Procope became the broker of record for the New York City Housing Authority and the insurance broker for the construction of the United States’ portion of the Alaska Pipeline. Licensed in all 50 states, the company counts IBM, Avon Products, Philip Morris Companies, General Motors and Time Warner among its clients. Procope is also the founder and president of Bowman Specialty Services, LLP. This extension of her business provides engineering and safety services.

In 1972, Procope was honored in a White House ceremony where she received the Woman of the Year award from First Lady Patricia Nixon. She was appointed by President Gerald Ford as a Special Ambassador to Gambia and has served on many corporate and community non-profit boards, including The Chubb Corporation, Boys & Girls Clubs of America and the New York Urban League. In addition, she has been a Trustee for Cornell and Adelphi Universities and served as Chairperson of the Adelphi Board of Trustees.

Procope holds Honorary Doctor of Laws degrees from Howard University, Adelphi University and Marymount Manhattan College, as well as a Doctor of Humane Letters from Morgan State University. She has received numerous awards. In 1993, Ernst & Young named her Entrepreneur of the Year. In 2003, Ms. Procope was inducted into the African American Hall of Fame and in 2006, she was named to the Minority Business Hall of Fame and Museum.

Procope’s husband of 40 years, John Procope, is former advertising executive and publisher of the New York Amsterdam News, and a trustee of Howard University.

See how Ernesta G. Procope is related to other HistoryMakers
Donate Now
Click Here To Explore The Archive Today!