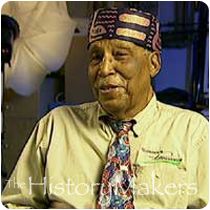 See how Ernest Withers is related to other HistoryMakers
Donate Now

Photojournalist Ernest C. Withers was born on August 7, 1922, in Memphis, Tennessee. Withers got his start as a military photographer while serving in the South Pacific during World War II. Upon returning to a segregated Memphis after the war, Withers chose photography as his profession.

In the 1950s, Withers helped spur the movement for equal rights with a self-published photo pamphlet on the Emmitt Till murder. Over the next two decades, Withers formed close personal relationships with Dr. Martin Luther King, Jr., Medgar Evers, and James Meredith. Withers's pictures of key civil rights events from the Montgomery Bus Boycott to the strike of Memphis sanitation workers are historic. Indeed, Withers was often the only photographer to record these scenes, many of which were not yet of interest to the mainstream press.

In his more than sixty-year career, Withers accumulated a collection of an estimated five million photographs; his works appeared in The New York Times, Jet, Ebony, Newsweek, and Life and were featured in touring exhibits and shows around the country. For his life’s work, Withers was elected to the Black Press Hall of Fame and received an honorary doctorate from the Massachusetts College of Art.

Ernest C. Withers passed away on Monday, October 15, 2007 at the age of eighty-five.

See how Ernest Withers is related to other HistoryMakers
Donate Now
Click Here To Explore The Archive Today!