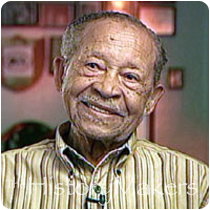 Favorite Color:
Pink
Favorite Quote:
If You Use Your Hands And Head You'll Make A Living.

Favorite Color:
Pink
Favorite Quote:
If You Use Your Hands And Head You'll Make A Living.

See how Ernest McBride is related to other HistoryMakers
Donate Now

Organizer, union activist and local NAACP field secretary Ernest McBride was born on November 12, 1909, in Carrollton, Mississippi. McBride was one of seven children of a farm couple. After completing his studies in segregated schools in Arkansas, McBride left the South for California, seeking a better life.

In 1965, McBride received a Long Beach city commendation for risking his life to save three children from a burning apartment. As a pastime, McBride played catcher for the Colored Giants, competing against the great Jackie Robinson, star of the Pasadena Dukes. Through it all, his house was a meeting place. Paul Robeson was his guest in 1948. McBride, his wife and six children often walked picket lines together. Now retired, McBride has eight grandchildren and four great-grandchildren and his home on Lemon Avenue has been designated an historic site by the city of Long Beach. McBride passed away on May 5, 2007.

See how Ernest McBride is related to other HistoryMakers
Donate Now
Click Here To Explore The Archive Today!