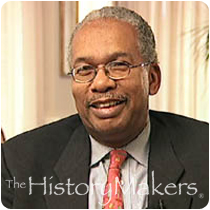 See how Ernest Green is related to other HistoryMakers

Ernest G. Green was born in Little Rock, Arkansas, on September 22, 1941 to Lothaire S. and Ernest G. Green, Sr. His parents instilled in him confidence and self-respect that helped him to become a leader among his peers and a civil rights advocate. He was one of the first black students to integrate at Central High School in Little Rock, Arkansas, following the Supreme Court ruling to desegregate in 1954. Green is the oldest of the "Little Rock Nine," a group of high school students who entered Central High School on the morning of September 25, 1957, with an escort of paratroopers. Governor Orval Faubus had summoned National Guardsmen to turn away the black pupils in direct defiance of the federal government, which had already approved a desegregation plan for the school. President Dwight D. Eisenhower, for the first time since Reconstruction, sent in federal troops to protect the rights of the beleaguered students, and the students ultimately prevailed.Green graduated from Michigan State University with a B.A. in 1962 and an M.A. in 1964.

In 1965, Green became involved in employment law with a building-trade apprenticeship for the Adolph Institute, a project to help minority women in the South find opportunities for professional careers. He then directed the A. Phillip Randolph Education Fund from 1968 to 1976. Between 1977 and 1981, he served as assistant secretary in the Labor Department under President Jimmy Carter. Since 1981, Green has worked in the private sector for consulting firms. He was a partner for Green and Herman from 1981 to 1985, owned E. Green and Associates from 1985 to 1986, and has been with Lehman Brothers since 1985.

Green has been on the boards of various organizations, such as the Winthrop Rockefeller Foundation, AfriCare and the African Development Foundation. He has received numerous awards and honors for his work, including the NAACP Spingarn Award, the Rockefeller Public Service Award, and honorary doctorates from Tougaloo College, Michigan State University, and Central State University.

He is married to Phyllis Green and they have three children, Adam, Jessica and McKenzie.

See how Ernest Green is related to other HistoryMakers
Click Here To Explore The Archive Today!