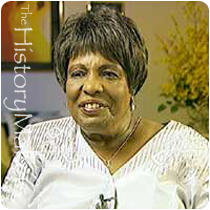 See how Erma L. Clanton is related to other HistoryMakers

Playwright, lyricist and teacher Erma Clanton was born in Memphis, Tennessee, on February 5, 1923, the fourth of eight children. After graduating from Booker T. Washington High School in Memphis, Clanton went to Alabama State University in Montgomery, where she earned a B.S. in 1945. She would later go on to earn a master's of theater and communication from the University of Memphis in 1969 and a doctor of humane letters from the Tennessee School of Religion in 2001.

After completing her bachelor's degree, Clanton went to work teaching English and speech at Melrose High School in Memphis, where she remained until 1969. During that time, she was actively involved in several productions performed by her students. In 1970, Clanton became an associate professor at the University of Memphis, where she taught theater and communications. Also during this time, Clanton began creating her own work, with her first piece, Roots, Rhymes & Righteous Times (An Evening of Soul) performed at the University of Memphis in 1971 and continuing under her direction until 1991. She went on to create and direct many more shows over the years, including Listen Children, God's Trombones, Black Pearls of the World, and Gifted & Black - On the Right Track. Along with her creation and direction of the shows, Clanton also writes original music. Clanton retired from the University of Memphis in 1991, yet continued to direct her new shows both in Memphis and elsewhere. In 1997 and 1998, she worked with gifted at-risk students at Hamilton High School, and then in 1999 Clanton taught one semester at Le Moyne Owen College.

In addition to her creative exploits, Clanton is active in a number of organizations, including serving as the chairperson of the Evening of Soul Foundation, a board member of Stax/Soulsville USA at the Museum of American Soul Music, and is a twenty-five-year member of the NAACP. She has received the Dr. Martin Luther King Distinguished Service Award from the University of Memphis and the Bronze Jubilee Award from PBS Radio & TV.

See how Erma L. Clanton is related to other HistoryMakers
Click Here To Explore The Archive Today!