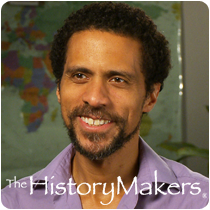 See how Erich Jarvis is related to other HistoryMakers
Donate Now

Neurobiologist Erich D. Jarvis was born on May 6, 1965, in the Harlem neighborhood of New York City to musicians James Jarvis and Sasha Valeria McCall. Growing up in an artistic but poverty-stricken household, Jarvis found an early passion for dance, which led him to the High School of the Performing Arts. He graduated from high school in 1983 and turned down an audition for the African American dance company, Alvin Ailey to attend Hunter College. As an undergraduate, he worked as a Minority Access to Research Careers (MARC) Fellow and researched protein synthesis genes in bacteria. After obtaining his B.A. degree in mathematics and biology in 1988, Jarvis pursued his Ph.D. degree in molecular neurobiology and animal behavior at The Rockefeller University where he researched vocal learning in songbirds. He received his Ph.D. degree in 1995 and stayed at The Rockefeller University to conduct postdoctoral research.

After completing his postdoctoral research, Jarvis joined the faculty of The Rockefeller University as an adjunct assistant professor and also participated in the Science Outreach Program of New York where he taught laboratory skills to inner city high school students. He left Rockefeller in 1998 to become an assistant professor in the Department of Neurobiology at Duke University. Jarvis also served as an assistant professor in the Department of Cognitive Neuroscience and the Center for Bioinformatics and Computational Biology. In 2005, he led the Avian Brain Nomenclature Consortium, a team of twenty-eight neuroscientists, who proposed a new nomenclature for the bird brain to better reflect a bird’s similarities with mammals in cognitive abilities. Jarvis also became a tenured associate professor at Duke in 2005 and in 2008, he was chosen to become an Investigator for the Howard Hughes Medical Institute. He has been an invited contributor for several books and has published more than fifty scholarly articles.

Jarvis has been recognized as a young pioneer in his field, and his research and study of songbird neurology has won him many awards including the National Science Foundation Alan T. Waterman Award, the Dominion Award: Strong Men and Women of Excellence: African American Leaders and the National Institute for the Humanities’ Director’s Pioneer Award in 2005. He has served as the director of the Neuroscience Scholars Program for The Society of Neuroscience, a member of Duke University’s Council on Black Affairs and a founding member of the Black Collective at Duke. Jarvis and his wife, Miriam Rivas, live in Durham, North Carolina and have two children.

Erich Jarvis was interviewed by The HistoryMakers on February 20, 2012.

See how Erich Jarvis is related to other HistoryMakers
Donate Now
Click Here To Explore The Archive Today!