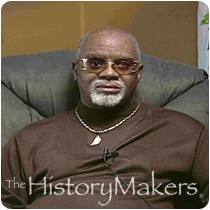 Music arranger, drummer, and vocalist Eric “Ricky” McKinnie was born on July 12, 1952, in Atlanta, Georgia, to Sarah Frances McKinnie Shivers and Ed Lee McKinnie. He attended Crogman Elementary School and graduated from Murphy High School in 1970. McKinnie and his brother were compared to Sam and Dave. Drawn to music, McKinnie joined Troy Ramey and the Soul Searchers in 1970. As a member of the Gospel Keynotes in 1972, McKinnie made a gold record, Jesus, You Been Good To Me. Losing his eyesight to glaucoma in 1975, McKinnie continued to perform, often serving as road manager. He formed the Ricky McKinnie Singers with his mother and brother in 1978. They went on to produce two radio programs that are still broadcast on Atlanta’s WYZE 1480 AM.

In 1989, McKinnie was invited by Clarence Fountain of the world-renowned Blind Boys of Alabama to join the group as a drummer, vocalist and tour manager. McKinnie’s success with the Blind Boys of Alabama includes four Grammy Awards for Best Traditional Gospel Album; the Alabama’s Governor’s Achievement Award; the 2000 induction into the Gospel Music Hall of Fame; the Gospel Quartet Hall of Fame in Birmingham, Alabama, and the 2002 Dove Award. McKinnie has been recognized by Atlanta’s Mayor Shirley Franklin for his contribution to Atlanta’s new anthem and has received an Honorary Doctorate degree from Atlanta’s Carver Bible College. McKinnie, a talented music arranger, is known as the only known blind gospel drummer and has received endorsements from Sabien Cymbol and Taye Drum Companies.

As a member of the Blind Boys of Alabama, he is a spokesperson for the Feed The Hungry Campaign, and supports the Glaucoma Foundation and the Diabetes Foundation. McKinnie and his family founded the Family and Friends Organization of Atlanta.

See how Eric "Ricky" McKinnie is related to other HistoryMakers
Donate Now
Click Here To Explore The Archive Today!