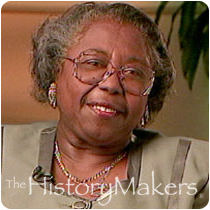 See how Enid C. Pinkney is related to other HistoryMakers
Donate Now

Preservation leader Enid C. Pinkney has worked aggressively over the years to ensure that the role of African Americans in Miami's history is acknowledged and preserved.

Pinkney was born the third of four children on October 15, 1931 in Miami-Dade County, Florida to Lenora and Henry Curtis. She graduated from the all-black Booker T. Washington High School in Miami in 1949, receiving a B.A. from Talladega College in 1953 and an M.S. from Barry University in 1967. Pinkney worked as a social worker from 1953 to 1955, after which she worked in the Dade County Public School System until she retired as Assistant Principal at South Miami Middle School in 1991.

She joined the Dade Heritage Trust historic preservation organization in the mid-1980s while Assistant Principal at South Miami Middle School. She was elected the first black president of the Trust in 1998. Pinkney is the founder of the African American Committee, which focuses on the contributions of blacks to the community. She has worked to preserve such historical sites as the landmark Brownsville Hotel, once the social and cultural epicenter of black Miami during segregation. Pinkney successfully led a group to form the Historic Hampton House Community Trust, working to save the hotel, which was declared a historical landmark in April 2002.

She is also an unofficial historian for Brown Sub, or Brownsville, the North Central Dade community where she lives. She has written a book and produced several videos on its history. The Miami Talladega College Alumni Association holds an Annual Enid C. Pinkney Humanitarian Awards Luncheon in which people are honored for their community contributions. Pinkney is married to Frank Pinkney, who is also involved with the Trust.

See how Enid C. Pinkney is related to other HistoryMakers
Donate Now
Click Here To Explore The Archive Today!