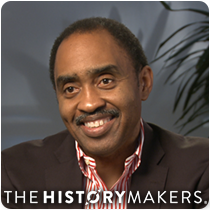 See how Emmett D. Carson is related to other HistoryMakers

Nonprofit chief executive Emmett D. Carson was born on October 6, 1959, in Chicago, Illinois to city business inspector Emmett Carson and Chicago Public School's head cook Mary Carson. He graduated from Emil G. Hirsch High School in 1977 and received his B.A. degree in economics from Morehouse College in Atlanta, Georgia in 1980. In 1983, he obtained his M.P.A. degree in international affairs from the Woodrow Wilson School of Public and International Affairs at Princeton University, followed by his Ph.D. degree in 1985.

In 1985, Carson became a social legislation analyst at the Library of Congress in Washington, D.C., before taking a position as a project director at the Joint Center for Political & Economic Studies in 1986. There, he designed and directed the first national comparative study of black and white charitable giving and volunteerism in America. He was an adjunct professor of Afro-American Studies at the University of Maryland, College Park from 1987 until 1989, when he became a program officer at the Ford Foundation in New York City. He managed the foundation’s Rights & Social Justice Program and its Governance & Public Policy Program. In 1994, Carson was named president and CEO of the Minneapolis Foundation in Minnesota, one of the nation’s oldest and largest community foundations, whose total assets more than tripled under his management. After Hurricanes Katrina and Rita caused over $120 billion in damage to Louisiana and surrounding states, Carson headed the Louisiana Disaster Recovery Foundation. He left the Minneapolis Foundation for the San Francisco Bay Area, where he merged the Community Foundation Silicon Valley and the Peninsula Community Foundation into the Silicon Valley Community Foundation, becoming its president and CEO.

In addition, Carson served on the board of directors of the National Economics Association, a professional association for minorities in the field, from 1993 to 1995; as chair of the board of the Association of Black Foundation Executives from 1994 to 1995; and on the board of Joint Venture Silicon Valley, which coordinates efforts between charitable foundations and Silicon Valley corporations. His research has received awards from the Joint Center for Political & Economic Studies and the National Economics Association.

Carson is married to professor and nonprofit executive Jacqueline Copeland-Carson, and they have one daughter, Yetunde Olagbaju, a graduate of Beloit College in Wisconsin.

Emmett D. Carson was interviewed by The HistoryMakers on December 16, 2015.

See how Emmett D. Carson is related to other HistoryMakers