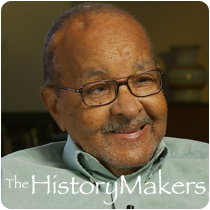 See how Emmett Chappelle is related to other HistoryMakers

Environmental scientist and biochemist[?] Emmett W. Chappelle was born on October 24, 1925 in Phoenix, Arizona to Viola White Chappelle and Isom Chappelle. His family grew cotton and tended cows on a small farm at the edge of town. Chappelle was drafted into the U.S. Army, right after graduating from the Phoenix Union Colored High School in 1942. He was assigned to the Army Specialized Training Program, where he was able to take some engineering courses. Chappelle was later reassigned to the all-Black 92nd Infantry Division and served in Italy. After returning to the U.S., Chappelle went on to earn his A.A. degree from Phoenix College. With the help provided by the GI Bill of Rights, Chappelle was able to receive his B.S. degree in biology from the University of California at Berkeley in 1950.

Chappelle went on to serve as an instructor at the Meharry Medical College in Nashville, Tennessee from 1950 to 1953, where he was also able to conduct his own research. Chappelle’s work was noticed by the scientific community, and he accepted an offer to study at the University of Washington, where he received his M.S. degree in biology in 1954. Chappelle continued his graduate studies at Stanford University, though he did not complete a Ph.D. degree. In 1958 Chappelle joined the Research Institute for Advanced Studies in Baltimore, where his research aided in the creation of a safe oxygen supply for astronauts. He went on to work for Hazelton Laboratories in 1963. In 1966, Chappelle joined the National Aeronautics and Space Administration (NASA) as a part of the Goddard Space Flight Center. Chappelle’s research has focused in the area of luminescence, which is light without heat. He has been involved in a number of projects, including the Viking space craft. Chappelle used chemicals from fireflies as well as adenosine triphosphate (ATP) to develop a method of detecting life on Mars. He used this research in bioluminescence, light produced by living organisms, to detect bacteria in water, as well as in improving environmental management.

Chappelle retired from NASA in 2001. He received fourteen U.S. patents, produced more than thirty-five peer-reviewed scientific or technical publications, nearly fifty conference papers, and co-authored or edited numerous publications. Chappelle has been honored as one of the top 100 African American scientist and engineers of the 20th century. He received an Exceptional Scientific Achievement Medal from NASA for his work. Chappelle was inducted into the National Inventors Hall of Fame in 2007. He lived with his daughter and son-in-law in Baltimore.

Emmett W. Chappelle was interviewed by The HistoryMakers on August 30, 2012.

See how Emmett Chappelle is related to other HistoryMakers
Click Here To Explore The Archive Today!