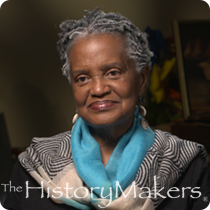 See how Emma Rodgers is related to other HistoryMakers
Donate Now

Entrepreneur Emma Rodgers was born on September 16, 1944 in Niagara Falls, New York. Rodgers completed her freshman year at Spelman College in Atlanta, Georgia and graduated from Texas Southern University in Houston, Texas in 1966.

In 1977, Rodgers co-founded a mail order business for books, which eventually became the retail store, Black Images Book Bazaar in Dallas, Texas. Rodgers’ support for African American authors, in association with Black Images Book Bazaar, brought commercial success and critical acclaim to numerous authors, including J. California Cooper, Edward P. Jones, E. Lynn Harris, and Edward Ball. In 1995, Rodgers founded Romance Slam Jam, an African American book genre conference event. The following year, Rodgers was selected as a member of the U.S. Information Agency Corridors of Culture team, which presented works at the “Muse to Marketplace” symposium in Accra, Ghana, Harare, Zimbabwe, and Namibia. In 2005, she organized and led a trip to Ghana for students from ROPP, Inc., an enrichment program for teenage girls. Black Images Book Bazaar closed its doors in 2006. However, Rodgers continued to hold book signings for established and upcoming authors. Since 2007, she served four terms on the Dallas City Planning and Zoning Commission.

Rodgers was an active participant in her community and has been involved with numerous organizations. She served as a board member for TeCoTheatrical Productions, and during the summers, Rodgers taught classes at the annual day camp. She was also the director for the Dallas Civil Rights Center, and served as a board member for Quuenhyte Publishers, and as a member of the advisory board for the Black Writer’s Alliance. She also facilitated a monthly book club and served as a publicist for the annual Irma P. Hall Theater Arts Festival.

She was the recipient of many awards and honors for her service to the community. In 2003, the Emma Award, which honored excellence in romance-action literature, was named in her honor. She was also the recipient of the Wordspace Award for Outstanding Support of Literature in 2004 and the Alpha Kappa Alpha Golden Soror of the Year in 2016. The Emma Rodgers Learning Laboratory was dedicated at Bishop Arts Theater in 2009.

Emma Rodgers was interviewed by The HistoryMakers on March 13, 2017.

See how Emma Rodgers is related to other HistoryMakers
Donate Now
Click Here To Explore The Archive Today!