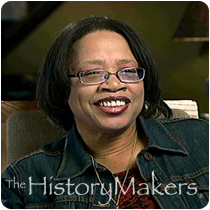 Favorite Color:
Purple
Favorite Food:
Pie (Pecan)
Favorite Vacation Spot:
Australia
Favorite Quote:
How Bad Can It Be When You Have God?

Favorite Color:
Purple
Favorite Food:
Pie (Pecan)
Favorite Vacation Spot:
Australia
Favorite Quote:
How Bad Can It Be When You Have God?

See how Emma E. Houston is related to other HistoryMakers

Emma Elizabeth Roberson Houston was born on February 18, 1956 in Navasota, Texas to Ida and Norman Roberson. Houston attended Dallas’ Albert Sidney Johnston Elementary School and Oliver Wendell Holmes Junior High School before moving with her family to Houston, Texas and graduating from Stephen F. Austin High School. Later, she earned her B.S. degree in business management from the University of Phoenix at Utah.

Houston has performed civic work in Salt Lake City, Utah for almost twenty years. In 1989, she was hired by the Girl Scouts of Utah and served as the director of membership until 1993. She eventually became the organization’s sales specialist, instilling entrepreneurial values in high school age girls through training and leadership workshops. Houston then served as the director of girl services and provided supervision, support, training and direction to staff members and volunteers. She went on to work for Rowland Hall St. Mark’s School as the diversity coordinator and at the 2002 Winter Olympic Games in Salt Lake City, Utah, Houston served her hometown by helping to keep the Olympic Village secure.

Houston was hired by Salt Lake County Aging Services in 2002 as center supervisor and later became the organization’s assistant program manager and the first in the State of Utah to facilitate a Senior Center receiving National Accreditation. Through her work, Houston helped to foster independence for the elderly by providing community-based services, in-home services and volunteer opportunities.

Houston, a breast cancer survivor, serves as a member of several institutions including the League of Black Women, the Salt Lake County Housing Authority, the Utah Gerontological Society and the Utah Commission on Women and Families. Houston has also served as the chair of the Governor’s Office of Black Affairs and corresponding secretary for the NAACP.

Houston was interviewed by The HistoryMakers on March 16, 2008.

See how Emma E. Houston is related to other HistoryMakers
Click Here To Explore The Archive Today!