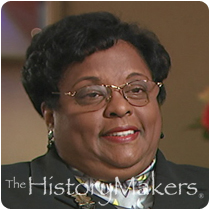 A trailblazer in African American commerce, Emma Chappell, née Bayton, was born in Philadelphia, Pennsylvania, on February 18, 1941. It was at age 16 that she first became interested in banking when her pastor and civil rights activist, Reverend Leon H. Sullivan, noted her mathematical abilities and encouraged her to pursue a career in banking. So, in 1959, she started as a bank clerk right out of high school.

However, Chappell set her ambitions higher than the clerk level. She went to night school for five years at Temple University, graduating in 1967. After graduation, the bank placed her in its executive training program, which she finished in 1971. By 1977, she had become Continental Bank's first African American Vice President. She was the first female Vice President of a major bank in all of Pennsylvania. In charge of the Community Business Loan and Development Department for loans to minority-owned and women-owned small businesses, she used her position to assist in the development of Philadelphia's black community. During this time, she also organized the Model Cities Business and Commercial Project, now Philadelphia Commercial Development Project, to revitalize commerce in the inner city. Chappell returned to school in 1982 and earned a masters degree from the Stonier Graduate School of Banking at Rutgers University.

Throughout her career, Chappell has maintained an interest in socio-political movements, serving as Chairperson on the Operation PUSH Board and as a founding Vice President of the National Rainbow Coalition. In 1984, Chappell took a leave from Continental Bank to serve as National Treasurer for Reverend Jesse Jackson's 1984 presidential campaign.

In 1987, a group of prominent black Philadelphians approached Chappell about the possibility of starting a black controlled bank, slating her as the potential leader. They contributed $600,000 to the venture and Chappell was left to solicit the remaining capital. The stock market crash of October 1987 stalled her efforts. Undeterred, Chappell sold stock for ten dollars a share in blocks of 50, raising over 6 million in capital. Commanding overwhelming community support from black churches and small investors, the United Bank of Philadelphia opened for business on March 23, 1992 with Chappell as CEO. In 1999, in recognition of its unprecedented growth, the United Bank received the coveted Blue Chip Enterprises Award, sponsored by Mass Mutual and the US Chamber of Commerce. Chapell left in 2000, but United Bank of Philadelphia remains a force in black banking, reflecting her tireless commitment to community empowerment and advocacy.

At the time of the interview, Chapell currently served as Director of the Rainbow Push Wall Street Project, a non-profit corporation that works to build bridges between large and small businesses.

Emma Chappell was interviewed by The HistoryMakers on May 16, 2001.