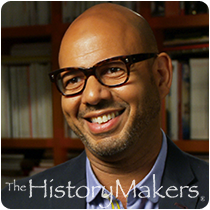 See how Emil Wilbekin is related to other HistoryMakers

Journalist and magazine executive Emil Kraig Wilbekin was born on September 16, 1967 in Cleveland, Ohio. His father, Harvey, was a lawyer and structural engineer; his mother, Cleota, a law judge and sociologist. In 1989, Wilbekin graduated with his B.S. degree in Mass Media Arts from Hampton University, where he was also editor of the Hampton Script. He went on to receive his M.S. degree in journalism from Columbia University’s Graduate School of Journalism in 1990.

Upon graduation, Wilbekin remained in New York City and worked as an in-house editorial assistant at Metropolitan Home and freelanced for a number of publications, including People Magazine, Chicago Tribune, Associated Press, and The New York Times. In 1992, Wilbekin became a founding editor of Vibe magazine. He went on to serve as Vibe’s associate editor and style editor, and then as fashion director; in 1999, he was named editor-in-chief. In 2002, under Wilbekin’s leadership, Vibe won the coveted National Magazine Award for General Excellence from the American Society of Magazine Editors. Then, in 2003, he became vice president of brand development for Vibe Ventures, where he oversaw Vibe.com, mobile, books, and Vibe TV, and executive produced the first Vibe Awards.

In 2004, Wilbekin left Vibe and was hired as vice president of brand development for Marc Ecko Enterprises and became a contributor and editorial board member of Complex magazine. He then went on to serve as a reporter for AOL Black Voices; a freelance writer for Out magazine; a consultant for Microsoft; and a consultant for Epiphany Media, where he worked in writing, curation and brand development. In 2008, Wilbekin was named editor-in-chief of Giant magazine and Giantmag.com, and in 2009, was made managing editor of Essence.com. He was then appointed as editor-at-large of Essence magazine in 2012. Wilbekin resigned in 2014 and became an independent consultant and editorial content executive.

Wilbekin has served on the boards of LIFEbeat - The Music Industry Fights AIDS, The Stonewall Foundation, the American Society of Magazine Editors, the Design Industries Fighting AIDS (DIFFA), and the Black AIDS Institute. His honors include the Pratt Institute’s Creative Spirit Award, the Howard University Entertainment, Sports, and Law Club Media Award, The Anti Violence Project’s Courage Award, and The Hetrick Martin Institute’s Emory Award. Out magazine named Wilbekin as one of 100 most influential gay people in America in 2002, and he was inducted into the Hampton University Mass Media Arts Hall of Fame in 2007.

Emil Wilbekin was interviewed by The HistoryMakers on June 16, 2014.

See how Emil Wilbekin is related to other HistoryMakers
Click Here To Explore The Archive Today!