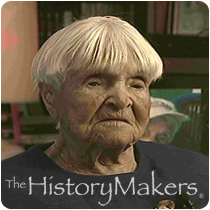 See how Elyse White is related to other HistoryMakers
Donate Now

Medical social worker and travel agent Elyse White was born on October 1, 1908 in Roanoke, Virginia to Julia Johnson, a school teacher, and William D. Woods, a minister. Graduating from Dunbar High School in Washington, D.C. in 1926, White graduated with her B.A. degree from Howard University in 1930. In 1942, White received her post graduate degree from Catholic University in Washington, D.C.

White went on to become a social investigator for the New York City Department of Welfare. In 1950, White began working as a medical social worker at Fordham Hospital in New York. Continuing her education, White received a degree from the New School of Social Research in New York in 1952, and then worked at Lincoln Hospital until 1965. White then took a job with the New York Board of Education as an attendance teacher.

In 1970, White started a third career as a travel agent, and in 1973, she and her sister embarked on a thirty day trip around the world, visiting Europe, Turkey, Israel, India, Japan and Hawaii. Her main love, however, has always been Africa. In 1975, White became a founding member of the African Travel Association (ATA) and began organizing and leading tourist expeditions to Africa. Over the next thirty years, White (who traveled to twenty-five African nations and over eighty countries around the world) made it possible for countless Americans to visit Africa and understand African culture. In 1998, the government of Ghana “enstooled” her as an Ashante Queen Mother for her dedication and promotion of the African continent.

White was interviewed by The HistoryMakers on February 22, 2007.

See how Elyse White is related to other HistoryMakers
Donate Now
Click Here To Explore The Archive Today!