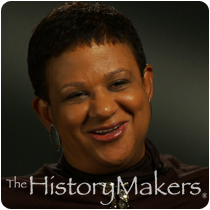 See how Elynor Williams is related to other HistoryMakers
Donate Now

Corporate executive Elynor A. Williams was born on October 27, 1946 in Baton Rouge, Louisiana to Albert and Naomi Williams. She graduated from Central Academy in Palatka, Florida before receiving her B.A. degree in home economics from Spelman College in 1966. Williams then joined Eugene Butler High School in Jacksonville, Florida as a home economics teacher. In 1968, she became an editor and publicist for General Foods Corporation in White Plains, New York. Williams received her M.A. degree in communication arts from Cornell University in 1973. At Cornell, she worked as a tutor for special education projects.

Following the completion of her education, Williams became a communication specialist for North Carolina Agricultural Extension Service. In 1977, she became a senior public relations specialist for Western Electric Company in Greensboro, North Carolina. Williams served as director of corporate affairs for Sara Lee Corporation’s Hanes Group in Winston-Salem, North Carolina from 1983 to 1986 and director of public affairs for the Sara Lee Corporation in Chicago, Illinois from 1985 to 1990. Then, she was promoted to vice president of public responsibility for the Sara Lee Corporation, becoming the company’s first African American corporate officer. During William’s time at Sara Lee, she directed the Sara Lee Foundation, served as executive secretary of the Employee and Public Responsibility Committee for the board of directors and founded the Frontrunner Awards to honor the achievements of outstanding women. After leaving the Sara Lee Corporation, Williams served as president and managing director of Chestnut Pearson and Associates, an international management consulting firm.

Throughout her long career, Williams has demonstrated a continued commitment to her community, becoming involved with numerous local and national organizations. She is a founding board member of the Executive Leadership Council and Spelman College Corporate Women’s Roundtable. Williams has served on the board of directors of the American Cancer Society Foundation, Children’s Memorial Hospital and the Chicago Sinfonietta. She is also deeply dedicated to the advancement of women, especially minority women and has worked with the National Women’s Economic Alliance, the National Coalition of 100 Black Women, Inc., the International Women’s Forum and the President’s Council of Cornell University Women. Williams has been recognized many times by national media including being named one of the 50 Top Black Executives in Corporate America by Ebony ; Magazine and one Chicago’s most powerful women by WBBM-TV. She has received the Drum Major for Justice Award from the Southern Christian Leadership Conference and was named a National Headliner by Women in Communications. Williams lives in Chicago, Illinois.

Elynor A. Williams was interviewed by The HistoryMakers on April 19, 2012.

See how Elynor Williams is related to other HistoryMakers
Donate Now
Click Here To Explore The Archive Today!