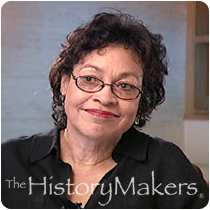 See how Elsie Rumford is related to other HistoryMakers

Suicidologist Elsie R. Rumford was born in Berkeley, California, on January 15, 1945; her mother, Elsie R. Carrington Rumford, was a teacher in Berkeley, and her father, pharmacist William Byron Rumford, was the first African American elected official in northern California. Attending Longfellow Elementary School, Burbank Junior High School and Berkeley High School, Rumsford earned her B.A. degree in Spanish and sociology from San Francisco State University in 1967, and her M.S.W. degree from the University of California at Los Angeles in 1973.

Rumford’s graduate thesis on the rising black suicide rate challenged popular thinking on the subject. After speaking before the Charles R. Drew Post Graduate Medical School, Martin Luther King Hospital, and the Suicide Prevention Center of Los Angeles in 1974, Rumford presented to the California State Senate Subcommittee on Medical Education and Health Needs in support of SB1814, the Suicide Prevention Act of 1974. Rumford appeared on many television and radio talk shows to discuss black suicides and worked as a script consultant to a suicide-related episode of The Jeffersons in 1976. Rumford worked as a clinical social worker for the Dignity Center, a Los Angeles Suicide Prevention Center program, from 1974 to 1975, and El Nido Services from 1976 to 1981. From 1985 to 1988, Rumford was a school-based counselor for the Carson Child Guidance Partnership Program for the Los Angeles Unified School District (LAUSD), and from 1988 to 1996 she was their outreach coordinator. After1997 Rumford began working as a team leader/DIS Counselor at the Los Angeles Unified School District’s School Mental Health.

Elsie Rumford was interviewed by The HistoryMakers on April 2, 2005.

See how Elsie Rumford is related to other HistoryMakers
Click Here To Explore The Archive Today!