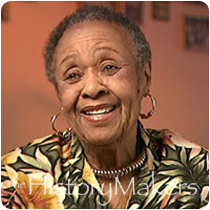 See how Eloise Demaris Hughes is related to other HistoryMakers

Dancer Eloise Demaris Hughes was born in Mobile, Alabama, on February 1, 1916, to Ethel Rowena and John Henry Williams. The family, including her sisters Lenese Brown and Annita Ethel Vance, migrated to Chicago, where Hughes graduated from Wendell Phillips High School.

Hughes started dancing professionally in her twenties. Between 1934 and 1944, she performed at Club DeLisa, the posh Chicago nightclub. There, she met show business stars like George Raft and John Barrymore, danced with legendary tap dancer Bill "Bojangles" Robinson, and worked with various other well-known performers such as Bessie Smith, Billy Eckstine, Dinah Washington and George Kirby. She traveled across the country, performing on stage at the Apollo Theater in New York City in 1935 and dancing in California in 1937. It was on the West Coast that she met Nat King Cole and his first wife, Nadine, and they became close friends.

For her efforts to further the cause of African American Catholics in Chicago, Hughes received the Augustus Tolton Award in 1996. In 1999, she attended the William Christopher Handy Music Festival in Florence, Alabama, where she took home top honors in the "Street Strut" contest. In 2000, she returned to become the festival's first female Grand Marshall, or "Grand Oobeedoo."

Hughes is married to Leon Leonard Hughes. They live in Chicago.

See how Eloise Demaris Hughes is related to other HistoryMakers
Click Here To Explore The Archive Today!