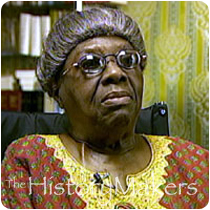 See how Elma Lewis is related to other HistoryMakers
Donate Now

Museum chief executive Elma Lewis was born September 15, 1921, in Boston to immigrant parents from the West Indies. Lewis devoted a lifetime to bringing culture into the lives of Boston's African American community. Lewis attended public schools in Boston and went to Emerson College to earn a B.A. in 1943. She received an M.Ed. from Boston University in 1944.

After completing her education, Lewis taught dance, drama and speech therapy, and in 1950 she founded the Elma Lewis School of Fine Arts. The school was established to meet the cultural and artistic needs of the African American community in Boston. Lewis developed a comprehensive program teaching dance, drama, art, music and costume design. Twenty-five students enrolled on the first day of school. In 1966, Lewis founded Playhouse in the Park, a summer theater program that featured performers such as Duke Ellington. Two years later, Lewis founded the National Center of Afro-American Artists, an umbrella organization that included the school, jazz and classical orchestras, a chorus, a dance troupe and a museum.

In 1981, Lewis was the recipient of a MacArthur Foundation Fellowship for her dedicated work in the arts, and in 1983 President Ronald Reagan presented her the Presidential Medal for the Arts. Although the Elma Lewis School of Fine Arts closed in 1990, many of Lewis' pupils have gone on to well-established careers in entertainment while others have opened up schools of their own. Lewis continues to be active with the NCAAA and is active with a number of other organizations as well. She is a trustee and life member of PBS station,WGBH, having been involved with it for forty years. She was also an active member of the Museum of Fine Arts in Boston for forty years as well as a trustee of the Massachusetts College of Art. Lewis has received more than 400 awards in her lifetime and twenty-eight honorary degrees.

See how Elma Lewis is related to other HistoryMakers
Donate Now
Click Here To Explore The Archive Today!