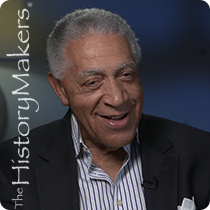 See how Elliott S. Hall is related to other HistoryMakers
Donate Now

Hall began his career practicing law as an associate at Gragg and Gardner, P.C. in 1966. He remained at Gragg and Gardner, P.C. until 1971, when he represented members of the Black Panthers Party. In 1971, with associate Dennis Archer, Hall formed the law firm of Hall, Stone, Allen, Archer and Glen. The following year, he served as president of the National Association for the Advancement of Colored People’s Detroit chapter. In 1974, Hall was appointed by Mayor Coleman Young as the first African American corporation counsel for the City of Detroit. He then became the first African American chief assistant prosecutor for Wayne County, Michigan in 1983. Hall served as chief assistant prosecutor until 1985, when he joined the Detroit law firm of Dykema, Gossett, Spencer, Goodnow and Trigg, where he remained until 1987. He then departed from Dykema, Gossett, Spencer, Goodnow and Trigg, and joined the Ford Motor Company as the company’s first African American vice president of governmental affairs. Hall remained in that position for a decade and then became the first African American vice president of dealer development at Ford Motor Company. In that role, he was instrumental in the expansion of the Minority and Woman Dealer Network. In 2002, Hall retired from Ford Motor Company and joined the law firm of Dykema Gosset PLLC as a senior partner.

As a community advocate, he served as vice president of the Economic Club of Washington, vice president of the Federal City Council, Treasurer of the Children’s Charities Foundation and as a member of the Industry Advisory Board of the Kennedy Institute. He received Human Relations Institute Civic Achievement Award from American Jewish Committee, Distinguished Alumni Award from Wayne State University Law School, the President’s Award from the National Bar Association and the President’s Award from the Wolverine Bar Association.


Elliott S. Hall was interviewed by The HistoryMakers on August 18, 2017.

See how Elliott S. Hall is related to other HistoryMakers
Donate Now