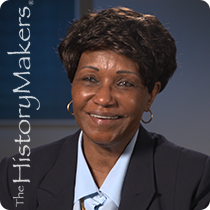 Favorite Color:
Green
Favorite Time of Year:
Spring
Favorite Vacation Spot:
Anything with a beach
Favorite Quote:
The bad news is not the last news.

Favorite Color:
Green
Favorite Time of Year:
Spring
Favorite Vacation Spot:
Anything with a beach
Favorite Quote:
The bad news is not the last news.

See how Ellenae Fairhurst is related to other HistoryMakers
Donate Now

Automobile sales entrepreneur Ellenae Fairhurst was born on January 6, 1943 in Dayton, Ohio to Jack J. Hart Sr. and Ellen Nora Hart. Fairhurst graduated from Paul Laurence Dunbar High School in Dayton, Ohio in 1961. She earned her B.S. degree from Miami University in Oxford, Ohio in 1965, and her M.A. degree in social and consumer psychology from the University of Detroit in 1973.

Fairhurst worked as a secretary for Motown Records and for the law firm of Goodman, Eden, & Robb, before she was hired in 1968 as a secretary at the Ford Motor Company. Fairhurst remained at Ford for seventeen years, where she served as a marketing research analyst and was promoted to project manager. She left her position in 1986, and joined the Chrysler Corporation, retail dealer development program. After two years with Chrysler, Fairhurst was named president and general manager of the Cumberland Chrysler-Plymouth dealership in Fayetteville, North Carolina. In 1992, she sold her shares in the Chrysler-Plymouth dealership and purchased a Dodge dealership in Huntsville, Alabama. Fairhurst then purchased a Nissan Infiniti dealership in 1999 and became the first African American female in North America to own an Infiniti dealership. The same year, she became the first African American female owner of a Lexus dealership, which was located in Huntsville, Alabama.

Fairhurst’s success as an automotive dealership owner was widely recognized. In 2001, Fairhurst’s “autoplex” was ranked at ninety-five on Black Enterprise magazine’s “Auto Dealer 100” list. The following year, the company was ranked at number fifty-six on the list. By 2013, the “autoplex” was moved to fifty-four on the “Auto Dealer 100” list. Fairhurst has been also awarded the Daimler-Chrysler Five Star Award, and Elite of Lexus Status for most years she’s been in operation.

Ellenae Fairhurst was interviewed by The HistoryMakers on August 14, 2017.

See how Ellenae Fairhurst is related to other HistoryMakers
Donate Now