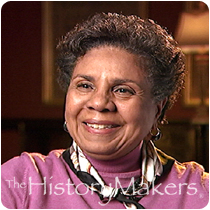 Ella Mizzell Kelly was born on March 17, 1939 in Columbia, North Carolina. Her father was a barber and her mother, a factory worker. During her early childhood, the family migrated to New York in search of better jobs. Shortly thereafter, her parents divorced and Kelly and her sister were raised by their mother. Identified as a gifted student during grade school, Kelly excelled academically. In 1955, she earned her high school diploma from Julia Richmond High School where she was active in the chorus, Latin Club and Student Government Association.

From 1955 until 1957, Kelly attended New York State Teachers College in Albany. She transferred to Howard University in 1957, where she earned her B.A. degree in history in 1960. During her senior year, she was selected to study abroad at Oxford in England.

From 1960 until 1968, Kelly taught history in the Washington, D.C. public school system, giving her students their first introduction to African American history. In 1963, Kelly earned her master’s degree in philosophy from Howard University. Between 1969 and 1977, Kelly worked for the Department of Education as a speechwriter and senior program officer. From 1983 until 1985, Kelly attended the University of California at Los Angeles. Leaving there, she worked until 1990 as a research assistant at UCLA and served on a task force examining the under-representation of African American students in California. From 1990 until 1994, Kelly worked as a teacher and administrator at Charles Drew University of Medicine and Science in the departments of family medicine and nursing education. In 1995, she earned her Ph.D. in social research methodology from UCLA. From 1994 until 1998, Kelly served as a consultant on women’s health issues for the California Public Institute and the UCLA School of Public Policy and Social Research. From 1998 until 2003, Kelly was a senior research scientist at UCLA’s Center for Community Health where she was responsible for developing initiatives to reduce health risks associated with HIV/AIDS and African American women.

In 2003, Kelly became the deputy director at Howard University College of Medicine in the Department of Pediatrics and Child Health, where she focuses on the impact of violence and substance abuse on low-income families and children.

See how Ella Mizzell Kelly is related to other HistoryMakers
Donate Now
Click Here To Explore The Archive Today!