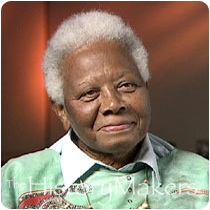 See how Ella Jenkins is related to other HistoryMakers

Ella Louise Jenkins, "the first lady of children's folk song," was born on August 6, 1924, in St. Louis, Missouri. Growing up on Chicago's South Side, Jenkins loved all kinds of games, but adored those involving rhythm, movement and music. Despite never having any formal musical training. Jenkins has become a first-rate composer and musician who plays the ukulele, the pipe organ, the harmonica and a wide variety of percussion instruments, in addition to singing.

Having graduated from high school, Jenkins set out in 1942 to find a job. Working in Wrigley's Gum factory, she earned an associate's degree from Wilson Junior College in 1947 and moved to California in 1948 to increase her opportunities. While watching two children play table tennis at a recreation center, Jenkins gave them some helpful pointers and was overheard by the center's director, who hired her on the spot. After graduating from San Francisco State College in 1951 with a B.A. in sociology, Jenkins moved back to Chicago and became a program director for teenagers at a YWCA in 1952.

While performing with young people on the street one day, she was invited to appear on the public television show, Totem Club. Asked to return again and again, Jenkins composed her own music for the first time. Moses Asch, the founder of Folkways Recordings, offered to record her songs. In 1956, Jenkins left her YWCA job to become a professional folk singer and released Call and Response: Rhythmic Group Singing the next year. Jenkins has been described as speaking to children, not down to them. Children, even those from vastly different backgrounds, were so enthralled with Jenkins' music that she began teaching children internationally, celebrating the beauty and value of diverse cultures.

The honors Jenkins has received include a Pioneer in Early Television citation, the Parent's Choice Award, a salute from the Ravinia Festival, a KOHL Education Foundation Lifetime Achievement Award and Cook County Children's Hospital Meritorious Service Award. She has served as a U.S. delegate to Hong Kong, China and the former Soviet Union with the John F. Kennedy Center for the Performing Arts. Smithsonian Folkways Records has produced over 30 Ella Jenkins albums since 1956. Generations of children have a deeper understanding of the world through her participatory music.

See how Ella Jenkins is related to other HistoryMakers
Click Here To Explore The Archive Today!