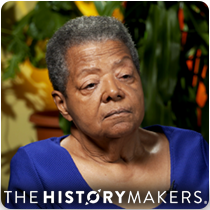 Favorite Color:
Cobalt blue
Favorite Food:
Seafood
Favorite Time of Year:
Spring
Favorite Vacation Spot:
Hilltop in Wilburforce Ohio along a snaking road
Favorite Quote:
The only way we can have true reconciliation with honest recognition of our painful but shared past

Favorite Color:
Cobalt blue
Favorite Food:
Seafood
Favorite Time of Year:
Spring
Favorite Vacation Spot:
Hilltop in Wilburforce Ohio along a snaking road
Favorite Quote:
The only way we can have true reconciliation with honest recognition of our painful but shared past

See how Elizabeth Eckford is related to other HistoryMakers

Civic activist Elizabeth Eckford was born on October 4, 1941 in Little Rock, Arkansas to Oscar Eckford, Jr. and Birdie Eckford. She attended Horace Mann High School and transferred to Little Rock Central High School in 1957 as one of the Little Rock Nine. Eckford took correspondence and night classes during the 1958 school year to earn enough credits to receive her high school diploma. Eckford attended Knox College in Galesburg, Illinois, then later earned her B.A. degree in history from Central State University in Wilberforce, Ohio in 1962.

Eckford moved to St. Louis, Missouri in 1959 and became the first African American to work in a bank in a non-janitorial position in the City of St. Louis. In 1967, Eckford joined the U.S. Army and worked as a payroll clerk and information specialist. She worked for the U.S. Army for five years and was stationed in Indiana, Georgia, Washington, and Alabama. Eckford also wrote for the Fort McClellan, Alabama and Fort Benjamin Harrison, Indiana newspapers. In 1973, Eckford returned to Little Rock and worked at the state welfare agency. Eckford also worked as a history teacher and as a probation officer for Judge Marion Humphrey of the Pulaski County Circuit Court in Arkansas in 1999.

A photograph of Eckford integrating Little Rock Central High School, taken by Will Count of the Arkansas Democrat, was nominated for a Pulitzer Prize in 1958. Eckford, along with the rest of the Little Rock Nine, were the recipients of the National Association for the Advancement of Colored People’s Spingarn Medal in 1958. She was awarded the Joseph Blitz Award in 1997. In 1999, President Bill Clinton presented all the members of the Little Rock Nine with the Congressional Gold Medal, the highest civilian award in the United States.

In 2018, Eckford was awarded an honorary doctorate degree from Knox College. The same year, Eckford released a book for young readers, The Worst First Day: Bullied while Desegregating Central High, co-authored with Dr. Eurydice Stanley and Grace Stanley and featuring artwork by Rachel Gibson. Later that year, the Elizabeth Eckford Commemorative Bench was dedicated at the corner of Park and 16th streets, and she received the Community Truth Teller Award from the Arkansas Community Institute.

Elizabeth Eckford was interviewed by The HistoryMakers on September 10, 2017.

See how Elizabeth Eckford is related to other HistoryMakers