Information about Elizabeth B. Rawlins 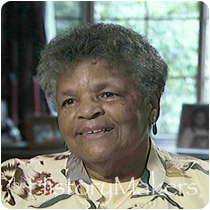 See how Elizabeth B. Rawlins is related to other HistoryMakers

Elizabeth B. Rawlins, dean and professor emeritus at Simmons College in Boston, Massachusetts, was recognized for her effective and tireless dedication to numerous educational and community organizations in Boston, across private and public higher education in Massachusetts, over a fifty-year period. Born on November 25, 1927, in Cambridge, Massachusetts, Rawlins attended the local public schools and graduated from Cambridge High and Latin School in 1944.

After high school, Rawlins attended Salem State Teachers College, where she earned her B.S. degree in education in 1950; from there she became an elementary school teacher in urban and suburban public schools, and in private schools in Massachusetts. From 1953 to 1954, Rawlins taught at Narimasu Elementary School in Tokyo, Japan. After earning her master’s degree in urban education from Simmons College in 1967, Rawlins left elementary school teaching and began working as a lecturer at Simmons, where she was an associate professor by 1976. From 1979 to 1992, Rawlins served as the associate dean of the Human Services Program; she became a professor of education in 1991, the same year that she received her Ed.D. degree from the University of Massachusetts at Amherst.

During her long career at Simmons, Rawlins often addressed racially sensitive issues; the establishment of the Elizabeth B. Rawlins Scholarship Fund at Simmons, and the Salem State College Rawlins Oratorical Contest are testaments to her leadership and contributions to higher education in Massachusetts, and the respect she earned in the process.

See how Elizabeth B. Rawlins is related to other HistoryMakers
Click Here To Explore The Archive Today!