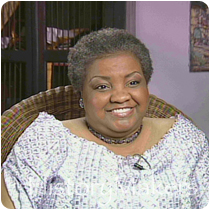 Favorite Color:
Purple
Favorite Food:
Chocolate Ice Cream
Favorite Time of Year:
Spring
Favorite Vacation Spot:
Beaches
Favorite Quote:
It's Only What You Do For Others That Will Last.

Favorite Color:
Purple
Favorite Food:
Chocolate Ice Cream
Favorite Time of Year:
Spring
Favorite Vacation Spot:
Beaches
Favorite Quote:
It's Only What You Do For Others That Will Last.

See how Elisabeth Omilami is related to other HistoryMakers
Donate Now

Humanitarian and actress Elisabeth Omilami was born on February 18, 1951 in Atlanta, Georgia. At an early age, Omilami’s parents taught her that people should be accountable for each other, for their environment and should fight for justice for all people. As a young girl, she accompanied her father, the noted civil rights leader Dr. Hosea Williams, on marches and movements across the South. During the height of the Civil Rights Movement, after having the distinction of being one of the youngest people arrested in the fight for civil rights, Omilami was sent to boarding school. She then attended Hampton University, where she received her B.A. degree in theater.

In 1970, during the time her father began his own humanitarian organization Hosea Feed, the Hungry and Homeless, Omilami founded The People’s Survival Theater, one of Atlanta’s earliest performing arts companies. She also created a summer arts camp that provided arts training for the economically challenged youth of Atlanta.

Under the leadership of Mrs. Omilami and her husband Afemo, Hosea Feed The Hungry and Homeless has expanded to a year round human services organization with programs that touch over 180,000 people annually. HFTH’s “Homeless Prevention" program is an award winning initiative credited with helping place thousands of families in permanent housing. The organization’s disaster relief activities have been commended by Georgia Governor Nathan Deal and reach far beyond Georgia into Alabama and Tennessee. HFTH operates the largest food bank in the region that supports families directly with nutritious emergency food.

Omilami is also the author of several plays, one of which, There is a River in My Soul, toured in February, 2002. As an actress, Omilami has combined her art with her life. She also toured in the play, The Life of a King, which her mother, State Representative Jaunita T. Williams co-authored. Omilami has acted in numerous films, including Runaway Jury, Ray, Madea’s Family Reunion and The Alter, a film which showcases the plight of the homeless while portraying them as individuals deserving of dignity and respect.

Omilami has been seen in "The Blind Side" alongside actress Sandra Bullock, in the Lifetime TV special "Marry Me" and at the Alliance Theatre in Janice Shaffer’s stage play "Broke".

Elisabeth Omilami is the wife of actor, Afemo Omilami, and has two children, Anodele and Tranita, and her granddaughter Kamaya. They live in Atlanta, Georgia.

Elisabeth Omilami was interview by The HistoryMaker on April 12, 2006.

See how Elisabeth Omilami is related to other HistoryMakers
Donate Now
Click Here To Explore The Archive Today!