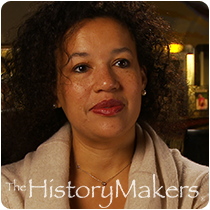 See how Elinor Tatum is related to other HistoryMakers
Donate Now

Newspaper publisher Elinor Ruth Tatum was born on January 29, 1971 in New York City, New York to Wilbert and Susan Tatum. Her father was a former publisher and chief executive officer of the New York Amsterdam News. Tatum was raised in New York City and was educated in the City’s primary and secondary schools. She graduated from St. Lawrence University with her B.A. degree in government studies in 1993. Tatum went on to attend Stockholm University in Stockholm, Sweden, where she studied international relations until 1994.

Upon returning from Sweden, Tatum joined her father at the New York Amsterdam News, where she accepted a position as assistant to the publisher. In 1996, she was promoted to associate publisher and chief operating officer. Tatum received her M.A. degree in journalism from New York University in 1997, and was promoted to publisher and editor-in-chief of the New York Amsterdam News, becoming one of the youngest publishers in the history of African American press. In 2006, Tatum began producing and co-hosting a weekly segment of Al Sharpton’s weekly radio show “Keep’in It Real.” She has also appeared on WNBC evening news, ARISE, The O'Reilly Factor, 20/20, New York 1, CUNY TV, the Today Show, and NBC Nightly News. After her father passed away in 2009, Tatum assumed full control of the New York Amsterdam News.

Tatum has held many civic positions and served on numerous community boards, including St. Lawrence University, the New York Urban League, the Neighborhood Defender Service of Harlem, the Chinatown YMCA, Manhattan Community Board 3, and the Creative Visions Foundation. She was also the former secretary of the National Newspaper Publishers Association.

Tatum has received many awards including recognition in Who’s Who of American Women; a Doctor Of Humane Letters Honorus Causae from Metropolitan College (New York City); Manhattan Borough Presidents’ Women’s History Month Award; the Public Advocate of New York City Award of Distinction; the Women Who Make A Difference Award; Outstanding Business Empowerment from the New York Chapter of Black Business and Professional Women Award; Standing On their Shoulders Award from the National Action Network, the Good Scout Award, and the Pi Beta Phi’s Members of Distinction Award.

Elinor Tatum was interviewed by The HistoryMakers on November 11, 2013.

See how Elinor Tatum is related to other HistoryMakers
Donate Now
Click Here To Explore The Archive Today!