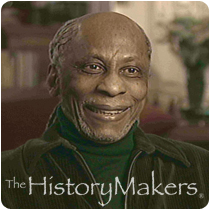 See how Eleo Pomare is related to other HistoryMakers

Choreographer and dancer Eleo Pomare was born on October 20 1937 in Santa Marta, Colombia. His father, Tawny Forbes, was the captain of a civilian freighter that was torpedoed near Colón, Panama during World War II. Pomare, at age six, who was with his father during the attack, survived and moved to live with his mother, Mildred Pomare Lee, in Panama. In 1947 Pomare was sent, alone, to New York City to live with an aunt and uncle who cared for him until some years later when his mother also moved to New York. He attended the New Lincoln School in Harlem, and later both P.S. #184 and James Fenimore Cooper Junior High School. At New York’s famed High School of Performing Arts, Pomare was mentored by Verita Pearson, and was exposed to such guest teachers as Uta Hagen and Martha Graham. While still a student, Pomare taught dance to other youth at the Police Athletic League (PAL). Soon, his pupils were performing at churches, schools and nearby Fort Dix. Moving into a building that housed Syvilla Fort’s studio near Town Hall, Pomare was exposed to the Durham technique by Walter Nicks and Talley Beatty. Graduating from the High School of Performing Arts in 1953, Pomare maintained his own dance company as he continued his training with Louis Horst, José Limón, Asadata Dafora, Pearl Reynolds and Curtis James. Pomare also befriended author James Baldwin, whose writing greatly influenced him.

In 1960, Pomare held his first major performance at the 92nd Street YMHA to favorable reviews. The following year he was awarded a John Hay Whitney Fellowship to study dance with Kurt Jooss in Essen, Germany. Pomare left the Jooss School and went on to reestablish the Eleo Pomare Dance Company, based in Amsterdam. He became a sensation in Europe. Using his own approach to choreography and teaching, he created his most celebrated works: Missa Luba, which combined the Catholic Mass with the music and voices of the Congolese Boys’ Choir; Blues for the Jungle, which depicted the history of African Americans from the earliest days of enslavement to the fight for equal rights in the 1960s; and Las Desenamoradas, which was inspired by Garcia Lorca’s play, The House of Bernarda Alba.

Over the years, Pomare received a number of dance fellowships including the aforementioned John Hay Whitney Fellowship and a Guggenheim Fellowship in 1972. The Eleo Pomare Dance Company toured North America, Europe, Australia, Asia, the Caribbean and Africa. They also performed in Lagos, Nigeria for FESTAC ’77, the World Festival of African Arts. Some of his featured dancers include Dudley Williams, Loretta Abbott, Al Perryman, Dyane Harvey, Charles Grant, Chuck Davis, Martial Roumain, Carl Paris, Leni Wylliams and Diana Ramos. In 1986, Pomare created Morning Without Sunrise, set to music by Max Roach, in honor of the heroism of Nelson Mandela.

In 1968, Pomare, along with Carole Johnson, Rod Rodgers, Gus Solomon and Pearl Reynolds, formed the Association of Black Choreographers and THE FEET, a black dance magazine. The Eleo Pomare Dance Company celebrated twenty-five years of dance in 1983, and January 7, 1987, was declared Eleo Pomare Day by the borough president of Manhattan, David Dinkins.

Pomare was a highly sought after teacher and choreographer until his death on August 8, 2008, at the age of 70.

Eleo Pomare was interviewed by The HistoryMakers on April 18, 2007.

See how Eleo Pomare is related to other HistoryMakers
Click Here To Explore The Archive Today!