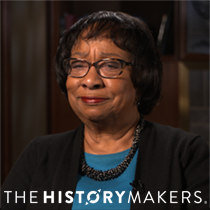 "What Are They Gonna Do Send Me To Vietnam?"

Civic leader and municipal administrator Eleanor Andrews was born on April 12, 1944 in Los Angeles, California to Jimmie Williams and Muriel Williams Poole. She received her diploma from Compton High School in 1962, and completed courses in general education and public administration at California State University, Los Angeles and the University of Alaska.

Upon moving to Fairbanks, Alaska in 1965, Andrews worked in various part time positions before becoming a youth counselor at the McLaughlin Youth Center for the State of Alaska in 1968. From 1975 to 1979, she served as a union representative and negotiator for the Alaska Public Employees Association. In 1980, she was hired as the union representative and negotiator for the International Brotherhood of Electrical Workers, Local 1547. In this role, she advocated for safety precautions, and fought to preserve the rights of electrical and communications workers, as well as local government employees and health care industry employees. In 1982, Andrews served as manager and director of human resources of the Municipality of Anchorage, where she handled over 3,500 employees. Serving as commissioner of administration for the State of Alaska from 1983 to 1986, Andrews was responsible for managing an annual operating budget of over $250 million, developing policy, and providing administrative support for the state government. In 1987, she established The Andrews Group, which offered assistance to small businesses pursuing U.S. government contracts. Andrews retired in 2007.

Andrews has received many awards including an Honorary Doctorate from the University of Alaska Anchorage and the ATHENA Society Leadership Award from the Anchorage ATHENA Society. Andrews served as the chancellor’s advisor to the University of Alaska, Anchorage from 2000 to 2012, and on the Alaska Judicial Council from 2000 to 2007. She helped found the Anchorage Urban League affiliate unit in 2006, serving as its board chair in 2007. Additionally, she served on boards of the Anchorage Chamber of Commerce, Providence Alaska Foundation and Commonwealth North, Inc. In 2014, she was inducted into the Alaska Women’s Hall of Fame.

Andrews resides in Alaska, and was married to Franklin S. Andrews.