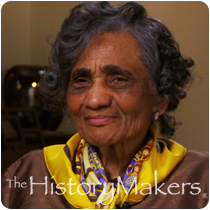 See how Eleanor Jones is related to other HistoryMakers

Mathematician and professor of mathematics, Eleanor Jones was born on August 10, 1929 in Norfolk, Virginia. Her mother, Lillian Vaughn Green, was a domestic worker, and her father, George Herbert Green, was a letter carrier. She attended Booker T. Washington High School where her favorite subject was mathematics. Jones graduated as valedictorian of her class at the age of fifteen and received a scholarship to attend Howard University. Jones received her B.S. degree in mathematics in 1949. She studied under Elbert Cox, the first African American to receive his Ph.D. degree in mathematics. Jones remained at Howard University where she received her M.S. degree in mathematics in 1950. Then, she returned to Booker T. Washington High School as a mathematics and science teacher for two years.

Jones was hired in 1955 as an associate professor of mathematics at Hampton University. When schools in Norfolk, Virginia were closed in 1958 due to forced integration, Jones helped tutor students in a local church. That same year, she also became vice chair of the Congress of Racial Equality (CORE) in Virginia. By 1962, Jones left Hampton to study mathematics at Syracuse University under the tutelage of Dr. James Reid. In 1965, she was elected to the Sigma Xi science honor society and went on to graduate from Syracuse University in 1966 as the eleventh African American woman to earn her Ph.D. degree in mathematics. Her thesis, entitled, “Abelian Groups and Their Endomorphism Rings and the Quasi-Endomorphism of Torsion Free Abelian Groups,” examined advanced abstract algebraic concepts. In 1967, Jones rejoined the faculty at Hampton University. One year later, she became professor of mathematics and chair of the department at Norfolk State University.

Jones retired as professor emeritus from Norfolk University in 2003. She served on the Committee for Opportunities for Underrepresented Minorities of the American Mathematical Society, the Executive board of the Association for Women in Mathematics and the Board of Governors for the Mathematical Association of America. Jones also held the position of vice president of the National Association of Mathematicians. She raised three sons, Everett B. Jones, Edward A. Dawley and the late Herbert G. Dawley.

Eleanor Jones was interviewed by The HistoryMakers on February 7, 2012.

See how Eleanor Jones is related to other HistoryMakers
Click Here To Explore The Archive Today!