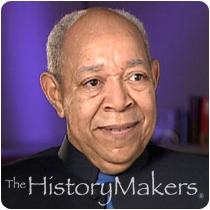 See how Eldee Young is related to other HistoryMakers
Donate Now

Eldee Devon Young was born on January 7, 1936, in Chicago, Illinois. His father, Walter, worked as a machinist and his mother, Beatrice, looked after the couple’s eight children. After learning the guitar from his brother at age ten, Young began playing the upright bass professionally at thirteen. He played at the After Hours Club on Sunday nights from 2:30 a.m. until dawn and then ate breakfast at home before heading to school. Young achieved great heights as a musician and could be heard on bass, cello and vocals with his own group, the Eldee Young Jazz Quartet before his passing.

Young met pianist Ramsey Lewis at McKinley High School. They played together until after graduation in 1953, when Young toured with a blues band through the South. However, he was unsatisfied and his preference for jazz and bebop led him to return to Chicago. Lewis, drummer Isaac "Redd" Holt and Young formed the Ramsey Lewis Trio. The three worked hard to improve their skills. Young went on to study at the American Conservatory of Music. The Ramsey Lewis Trio released their first album in 1956, becoming hugely successful. Their albums The In Crowd and Hang on Sloopy went gold and the group sold out Carnegie Hall. However, the pressures of fame caused friction and in 1965 Young and Holt split to form Young-Holt Unlimited. The Soulful Strut, released soon after, sold enough copies to be certified gold. Young also performed with other artists, including Dinah Washington; Dizzy Gillespie; and Oscar Brown, Jr.

Young and his wife, Barbara, have three children, Eldevon, Tyree and Marcus. Young performed for numerous television and radio programs, as well as for movies. In his later years, he spent six months a year performing in Singapore.

Young passed away on Monday, February 12, 2007 in Thailand where he was performing. Young was 71 years old.

See how Eldee Young is related to other HistoryMakers
Donate Now
Click Here To Explore The Archive Today!