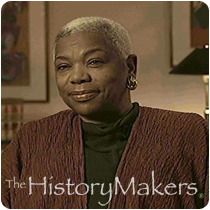 Favorite Color:
Blue, Browns
Favorite Food:
Fish
Favorite Time of Year:
Spring
Favorite Vacation Spot:
Anywhere New
Favorite Quote:
You Do The Best You Can, And That's All You Can Do

Favorite Color:
Blue, Browns
Favorite Food:
Fish
Favorite Time of Year:
Spring
Favorite Vacation Spot:
Anywhere New
Favorite Quote:
You Do The Best You Can, And That's All You Can Do

See how Elaine Jones is related to other HistoryMakers
Donate Now

Legal powerhouse and civil rights lawyer Elaine Ruth Jones was born on March 2, 1944 in Norfolk, Virginia, the daughter of a Pullman porter and a schoolteacher. Jones observed firsthand the impact of racism on her community, when one of her teachers was represented by Thurgood Marshall in the case, Allen v. Hicks.

Jones attended Howard University, where she worked her way through school. Joining the Delta Sigma Theta Sorority, Inc. and becoming dean of pledges, Jones graduated from Howard University in 1965, finishing school on the Dean’s List. After college, she entered the Peace Corps, where she traveled to Turkey and taught English as a second language. Jones considered applying for a second tour of duty in Micronesia, but decided to return to school in 1967.

In 1967, Jones entered the University of Virginia Law School, where she was one of five black students and the only female. After her graduation in 1970, Jones was offered a job with a prominent Wall Street firm, but declined the offer in order to take a position at the NAACP’s Legal Defense Fund (LDF), which, at that time, was headed by Jack Greenberg.

In 1972, Jones represented a black man on death row who had been accused of raping a white woman in the Furman v. Georgia Jones case. The Supreme Court decision on the case abolished the death penalty in thirty-seven states for twelve years, only two years after Jones had left law school. During this time, Jones argued numerous discrimination cases, including some against the country’s biggest employers. These cases included Patterson v. American Tobacco Co., Stallworth v. Monsanto, and Swint v. Pullman Standard. In 1973, Jones became the Legal Defense Fund’s managing attorney.

In 1975, Jones left the NAACP’s LDF to join President Ford’s administration as Special Assistant to Secretary of Transportation William T. Coleman. She returned to the LDF in 1977 as a litigator. During her continued tenure with the LDF organization, she was instrumental in the passage of 1982’s Voting Rights Act Amendment, 1988’s Fair Housing Act and Civil Rights Restoration Act and the Civil Rights Act of 1991. Jones was elected to the American Bar Association Board of Governors in 1989, the first African American to do so. In 1993, Jones became the first female president and defense counsel for the NAACP Legal Defense and Education Fund. She was named one of Ebony Magazine’s “10 Most Powerful Black Women” in 2001. Jones works as Director-Counsel of the LDF, and received an honorary degree from Spelman College in 2007.

Jones was interviewed by The HistoryMakers on November 30, 2006.

Sponsored by Potomac Chapter of The Links, Inc

See how Elaine Jones is related to other HistoryMakers
Donate Now
Click Here To Explore The Archive Today!