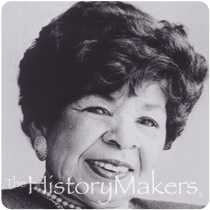 Favorite Color:
Yellow
Favorite Food:
Barbecue (Ribs)
Favorite Time of Year:
Spring
Favorite Vacation Spot:
Paris, France
Favorite Quote:
It Is Only With The Heart That One Sees Rightly; What Is Essential Is Invisible To The Eye.

Favorite Color:
Yellow
Favorite Food:
Barbecue (Ribs)
Favorite Time of Year:
Spring
Favorite Vacation Spot:
Paris, France
Favorite Quote:
It Is Only With The Heart That One Sees Rightly; What Is Essential Is Invisible To The Eye.

See how Effie Lee Morris is related to other HistoryMakers

Public children’s library administrator Effie Lee Morris was born on April 20, 1921, in Richmond, Virginia, to Erma Lee Caskie Morris and William Hamilton Morris. Morris is the eldest of two daughters. She grew up in Richmond until the age of eight when her family moved to Cleveland, Ohio for her father’s job as head chef with the Chesapeake & Ohio Railroad Company. Morris can trace her family history back to slavery and owns the slave papers of her paternal great grandmother. Morris loved to read at an early age and grew up trading books with her friends and family members. She attended Robert Fulton Elementary School and John Adams High School in Cleveland. Morris was her high school class's co-valedictorian with three other students. Morris earned her B.A. and M.L.S. degrees at Case Western University.

Morris began her career as a public librarian at the Cleveland Public Library in 1946. There, she specialized in working with children and children’s literature. Morris moved to New York in 1955 after working for the Philadelphia Public Library in order to work for the American Library Association. That same year, she went on to work for the New York Library for the Blind and served as the first female chairperson of the Library of Congress. Morris also served as president of the National Braille Association for two terms. In 1963, Morris moved to San Francisco, California and became the first Coordinator of Children’s Services at the San Francisco Public Library. In 1964, Morris established the Children’s Historical and Research Collection at the Children’s Center of the San Francisco Library. In 1968, she founded the San Francisco Chapter of the Women’s National Book Association, and in 1971, Morris became the first African American president of the Public Library Association. She officially left her position as Coordinator of Children’s Services of the San Francisco Library in 1977, and in 1981, the children’s literature collection that she started was officially named the Effie Lee Morris Historical and Research Collection.

Morris continues to be an advocate for children and children’s literature. Morris and the San Francisco Public Library hold an annual lecture series that features a children’s literature author and illustrator. Some of the lecturers have included children’s book authors Nikki Grimes, Milly Lee, Pamela Munoz and Tomie dePaola. Morris has received several awards for her work and contributions to children’s literature, including the Silver Spur Award for enhancing the quality of life and economic vitality of San Francisco; the Women’s National Book Association’s Award for Extraordinary Contribution to the World of Books; and the Grolier Foundation Award.

See how Effie Lee Morris is related to other HistoryMakers
Click Here To Explore The Archive Today!