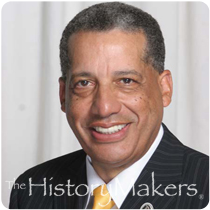 See how Edwin Rigaud is related to other HistoryMakers
Donate Now

Businessman and civic leader Edwin Joseph Rigaud was born to Army Sergeant Edwin Rigaud and Mabel Perrilliat Rigaud on June 25, 1943 in New Orleans, Louisiana. He attended Corpus Christi School, which was located in the largest African American Catholic parish in the Western Hemisphere. One of Rigaud’s high school teachers was the famous activist Phillip Berrigan (brother of activist Daniel Berrigan). Rigaud graduated from St. Augustine High School in 1961. Earning a B.S. degree in chemistry from Xavier University in New Orleans in 1965, he married Carole Tyler and then moved to Cincinnati, Ohio where he went to work for Procter & Gamble. There, Rigaud became the first African American hired at the management level in the Food Product Development Department of R&D at Procter & Gamble. He received his M.S. degree in biochemistry from the University of Cincinnati in 1973.

In his thirty-six years at Procter & Gamble, Rigaud was one of the first African Americans in the corporate research area. Moving to marketing and general management, guided by Procter & Gamble executives Ken Ericson and Mike Milligan, he attended the Advanced Management Course at Harvard University, and in 1992, Rigaud became the first African American line vice president in the history of Procter & Gamble, eventually serving as Vice President of Food and Beverage Products and finally as
Vice President of Government Relations in North America in 1996.

Also, in 1996, Rigaud, on loan as an executive from Procter & Gamble, was appointed the first executive director of the National Underground Railroad Freedom Center in Cincinnati. He was appointed to the National Museum and Library Services Board by President George W. Bush in 2002. In 2004, Rigaud moved from executive director to President and CEO of the museum. He also started his own firm, Enova Partners, LLC and Enova Tech, LLC, which are both plastic injection-molding businesses in the automotive and consumer products industries.

Rigaud has a long record of service including serving on the boards of The Federal Reserve Bank of Cleveland, Xavier University in Cincinnati, Xavier University of New Orleans, Children’s Hospital of Cincinnati, the Ohio Board of Regents, the Cincinnati Zoo, the Queen City Club, the Metropolitan Club, and the Northern Kentucky Chamber Board.

Rigaud is married to Carole Tyler Rigaud and has three grown children. He enjoys painting, playing jazz guitar and golf.

See how Edwin Rigaud is related to other HistoryMakers
Donate Now
Click Here To Explore The Archive Today!