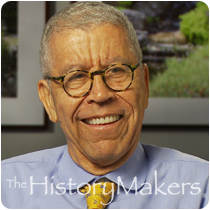 "If You Aim Low You Can't Fall, If You Aim High, You Have A Place To Fall."

Biologist and immuno-biology professor Edwin Cooper was born on December 23, 1936, in Houston, Texas. Cooper attended Jack Yates High School, graduating with honors in 1957. He won the first prize in a state art contest, for which his ceramic vase was sent to the national competition at the Carnegie Art Institute. Although Cooper was interested in art, he was more attracted to the field of biology, studying butterflies, earthworms, and other animals as a youth. Cooper pursued his interest in biology at Texas Southern University, where he earned his B.S. degree in 1957 with honors. Continuing his studies in biology, Cooper earned his M.S. degree in biology from Atlanta University in 1959 and his Ph.D. degree from Brown University in 1963.

Upon completing his doctorate, he became an assistant professor of anatomy at the University of California at Los Angeles School of Medicine in 1964 and attained full professorship by 1973. Cooper taught immunology around the world, beginning with an exchange program (sponsored by the Agency for International Development) with the Instituto Politecnico Nacional in Mexico City, Mexico. He later received a prestigious Guggenheim Fellowship to the Karolinska Institute in Stockholm, Sweden in 1970, while maintaining his position at UCLA. Cooper founded the Division of Comparative Immunology of the American Society of Zoologists in 1975 and was a founding editor of the International Journal of Developmental and Comparative Immunology, and its society, the International Society of Developmental and Comparative Immunology. He has founded similar national groups in Japan and Italy. From 1989 to 1993, Cooper served as the vice chair for UCLA’s Department of Anatomy and Cell Biology. He became the founding editor in chief of "Evidence Based Complementary and Alternative Medicine" in 2004.

Throughout his professional career, Cooper’s research has been at the forefront of the discoveries made in the field of immunobiology, better known as comparative immunology following the publication of the first textbook and many others related to comparative immunology: he is credited with having established that discipline. His research on invertebrate immune systems and the evolution of immune systems has been published in several immunology journals including the Journal of Biological Chemistry and the Proceedings of the National Academy of Sciences. From studying chronic allograft rejection in earthworms to the identification of characteristics of the fish, amphibians and other invertebrates, Cooper shifted the focus of his work to better understand vertebrate and human disease. The products of terrestrial and marine invertebrates are useful in certain diseases as was discovered in ancient cultures like in China and India.

The impact of Cooper’s work has been recognized; Cooper has received five honorary degrees internationally, including one from his alma mater, Brown University, in 1988. He has also been awarded other international prizes in the sciences, such as the Alexander von Humboldt Prize in Germany, The Eleanor Roosevelt Award for Cancer Research to work with the Ludwig Institute for Cancer Research in Switzerland, and the S.M. Nabrit Achievement Award in Science from Atlanta University.

Cooper and his wife, Helene, have two adult children.

Edwin Cooper was interviewed by The HistoryMakers on April 27, 2011.