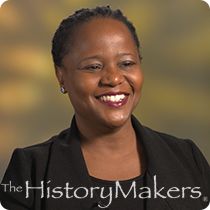 See how Edwidge Danticat is related to other HistoryMakers

Author Edwidge Danticat was born on January 19, 1969 in Port-au-Prince, Haiti to André Danticat and Rose Danticat. In 1981, she moved to Brooklyn, New York, where she graduated from Clara Barton High School and received her B.A. degree in French literature from Barnard College in New York City in 1990; and her M.F.A. degree in creative writing from Brown University in Providence, Rhode Island in 1993.

In 1983, at age fourteen, Danticat published her first writing in English, “A Haitian-American Christmas,” in New Youth Connections, a citywide magazine written by teenagers. Her next publication, “A New World Full of Strangers,” was about her immigration experience and led to the writing of her first novel, Breath, Eyes, Memory in 1994. In 1997, she was named one of the country’s best young authors by the literary journal Granta. Danticat’s other works include, Everything Inside, Claire of the Sea Light, Brother, I’m Dying, Krik? Krik!, The Farming of Bones, The Dew Breaker, and Create Dangerously: The Immigrant Artist at Work.

Danticat has also taught creative writing at New York University and the University of Miami. She has worked with filmmakers Patricia Benoit and Jonathan Demme, on projects on Haitian art and documentaries about Haiti. Her short stories have appeared in over twenty-five periodicals and have been widely anthologized. In 2009, she narrated Poto Mitan: Haitian Women Pillars of the Global Economy, a documentary about the impact of globalization on five women from different generations.

Danticat’s works received critical acclaim and won numerous awards. Brother, I’m Dying won a National Book Critics Circle Award, Breath, Eyes, Memory was chosen as an Oprah Book Club selection, The Farming of Bones won an American Book Award, The Dew Breaker received a Story Prize, and The Art of Death was a finalist for a National Book Critics Circle Award. Danticat won fiction awards from Essence and Seventeen magazines, was named as one of “20 people in their twenties who will make a difference” by Harper’s Bazaar magazine, was named one of the “15 Gutsiest Women of the Year” by Jane magazine, and was the recipient of a MacArthur Genius Fellowship, a Ford Fellowship, and The 2018 Neustadt Prize. Danticat has also received honorary doctorate degree from Brooklyn College, Brown University, Yale University, Smith College, Adelphi University, Saint Thomas University, The University of Indianapolis, and the University of the West Indies Open Campus.

Danticat and her husband, Faidherbe “Fedo” Boyer, have two daughters, Mira and Leila.

Edwidge Danticat was interviewed by The HistoryMakers on March 10, 2017.

See how Edwidge Danticat is related to other HistoryMakers