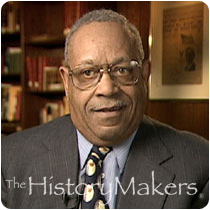 See how Edward Smith, Sr. is related to other HistoryMakers
Donate Now

Edward Neil Smith was born on September 19, 1930 in Detroit, Michigan. He spent much of his life in Indiana, where he earned an excellent reputation in the legal profession.

After graduating from Crispus Attucks High School in Indianapolis, Indiana in 1949, Smith worked as a core maker at American Foundry. He served as a caseworker for the county welfare agency in 1956 and worked his way through Indiana Central College. Majoring in government and business, he received his bachelor's degree in 1958. In 1961, Smith earned a Doctor of Law degree from Indiana University School of Law. That year, he began serving as a deputy attorney general for the State of Indiana. He was appointed deputy prosecutor for Allen County in 1962. The same year, he served as associate attorney for the City of Fort Wayne, Indiana and began practicing privately. He served for 12 years as attorney for the Wayne Township Trustee in Allen County, Indiana.

Smith studied through the University of Nevada in Reno, receiving certification from the National College of Advocacy in advanced civil and criminal trial advocacy in 1975. In 1978, the National Judicial College of the same university accredited him in administrative law procedure. Smith served as the state chairman of the Indiana Black Republican Council. He also served for four years as a board member of the Fort Wayne Metropolitan Human Relations Commission, a committee focused on civil rights, and as director for the Northeast Indiana Radio Reading Service, an organization that aids the blind. He and his wife, Edna, have four adult children: Alice, Linda, Edward and Charles.

See how Edward Smith, Sr. is related to other HistoryMakers
Donate Now
Click Here To Explore The Archive Today!