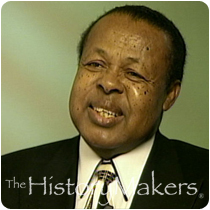 See how Edward Robinson is related to other HistoryMakers

Gospel pianist Edward Robinson was born in 1933. At a young age, Robinson sat down at his older brother's piano and began playing the song "Does Jesus Care" by ear. This experience began a lifetime dedicated to gospel music.

After his family moved to Chicago from Birmingham, Alabama, Robinson started playing piano for Louis Bodie. He became an accompanist for Mahalia Jackson and traveled the world with her for seventeen years. While traveling with Mahalia Jackson, he played gospel songs at the White House for five presidents, performed before European royalty and took the stage at New York's legendary Carnegie Hall. He has also performed with Aretha Franklin, Albertina Walker, Sam Cooke, The Caravans, Gladys Knight and Robert Anderson.

Despite his professional success, Robinson remained faithful to his gospel roots. In 1997, Mayor Richard Daley and the City of Chicago honored Robinson as one of Chicago's pioneers of gospel music. Former Illinois Governor George Ryan also honored him as a historian.

Edward Robinson was interviewed by The HistoryMakers on April 23, 2003.

See how Edward Robinson is related to other HistoryMakers
Click Here To Explore The Archive Today!