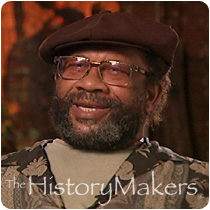 See how Edward Parker is related to other HistoryMakers

Master artist, educator, and entrepreneur, Edward Everett Parker, was born in Pittsburgh's Hill District on Bentley Drive on February 7, 1941, to Augustine Washington and David Nathaniel Parker. When Parker was in elementary school, his parents moved Edward and his brother David to Toledo, Ohio, where he studied at the Toledo Museum of Art. Parker attended Lincoln Elementary School and graduated from Scott High School; he earned his bachelor's degree in art from Central State University in Wilberforce, Ohio, and his master's degree in Art Education, with an emphasis in sculpting, from Ohio's Kent State University. Parker also completed additional graduate level work at the University of Illinois and in Ife, in West Africa.

Parker taught art education in the Cleveland Public Schools, where he served as the head of the art department at Audubon Jr. High for a number of years. Parker later attained the position of professor and arts coordinator at the Western Campus of Cuyahoga Community College where he taught for nearly twenty years. Parker founded and acted as the director of the Snickerfritz Cultural Workshop for the Arts, Inc., located in the Edward E. Parker Creative Arts Complex in East Cleveland, Ohio. The complex, which also includes gallery and classroom space, meeting rooms, and a number of small businesses, is housed in a converted nursing home that sat vacant and dilapidated for seventeen years before Parker purchased and rehabilitated the facility.

Parker's artistic achievements include numerous one-man and group shows in Ohio and other states, and commissions from Cleveland's Cuyahoga Community College and Florida Memorial College. Parker's vision as an artist has long been informed by African American history and culture; his better known works include a life-sized sculpture of the Chicken George character from Alex Haley's Roots and a celebrated series of African American clown sculptures and prints. After the 2008 election of Barack Obama as the forty-forth President of the United States, Parker sculpted Obama's likeness and displayed the bust in his Snickerfritz Art Gallery. In addition to his work in the arts, Parker also served on the Board of Trustees for the East Cleveland Library.

See how Edward Parker is related to other HistoryMakers
Click Here To Explore The Archive Today!