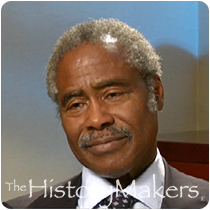 See how Edward Lewis is related to other HistoryMakers
Donate Now

Magazine publisher and entrepreneur Edward Lewis was born on May 15, 1940, in the Bronx, New York. His father was a night shift janitor at City College; his mother a factory worker and beautician. Lewis attended De Witt Clinton High School, where he excelled academically and was a star fullback on the football team. Upon graduating from high school in 1958, he earned a football scholarship to the University of New Mexico. Lewis received his B.A. degree in political science in 1964 and his M.A. degree in political science and international relations in 1966, both from the University of New Mexico. He later graduated from Harvard University’s Small Business Management Program.

Lewis worked first as an administrative analyst for the City Manager’s Office in Albuquerque, New Mexico from 1964 to 1965, and then as a financial analyst at First National City Bank in New York City from 1965 to 1969. In 1969, he co-founded Essence, a magazine specifically targeted to black women, and went on to serve as CEO and publisher of Essence Communications, Inc. for three decades. In the 1980s and 1990s, Lewis expanded Essence Communications to include a weekly television show, fashion line and mail order catalogue, as well as an annual awards show and Essence music festival. In 1992, Lewis acquired Income Opportunities from Davis Publishing; and, in 1995, he co-founded Latina magazine, a bilingual publication geared toward Hispanic women.

In 1997, Lewis became the first African American chairman of the Magazine Publishers of America. In October 2000, Lewis engineered a partnership with Time, Inc. and Essence Communications was sold to Time in 2005. He later joined the private equity firm Solera Capital as a senior adviser and published a memoir, The Man from Essence: Creating a Magazine for Black Women, in 2014.

Lewis has sat on the boards of TransAfrica, the Rheeland Foundation, New York City Partnership, the Central Park Conservancy, A&P, Jazz at Lincoln Center, the Teachers College of Columbia University, Spelman College, Tuskegee University and the Harlem Village Academy; and served as chairman of Latina Media Ventures. He also served on President Barack Obama’s Board of Advisors for the Initiative on Historically Black Colleges and Universities.

Edward Lewis was interviewed by The HistoryMakers on October 7, 2014.

See how Edward Lewis is related to other HistoryMakers
Donate Now
Click Here To Explore The Archive Today!