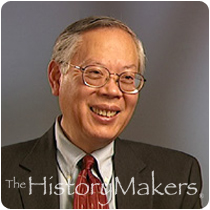 Favorite Color:
Blue
Favorite Food:
Barbecue (Ribs)
Favorite Time of Year:
Spring
Favorite Vacation Spot:
Charleston, South Carolina
Favorite Quote:
What You Learn After You Think You Know It All Is Most Important.

Favorite Color:
Blue
Favorite Food:
Barbecue (Ribs)
Favorite Time of Year:
Spring
Favorite Vacation Spot:
Charleston, South Carolina
Favorite Quote:
What You Learn After You Think You Know It All Is Most Important.

See how Edward J. Williams is related to other HistoryMakers
Donate Now

Born on Chicago’s South Side on May 5, 1942, Ed Williams has risen to the top in the world of banking. He attended Tilden Tech, and transferred to Englewood High School after two years. Following his high school graduation, he attended Clark College in Atlanta on a scholarship, though he returned to his native Chicago before graduating. Williams later returned to school, earning a B.S. degree in business administration from Roosevelt University in Chicago in 1973.

Upon his return to Chicago from Atlanta in 1961, Williams, with help from an alumnus of Clark College, bought a newspaper distributorship for the Chicago Tribune on the city’s West Side. The neighborhood at the time was turbulent, and the franchise was sold to him for $6,000, ten percent of the average value of similar operations. Soon, Williams had twenty-five employees. He left the business in 1962, however, after seeing his employees get hurt in robberies. Under the advice of Supreme Life Insurance chairman Earl Dickerson, Williams attempted to get a job with one of their partners, but was turned down for being too light skinned. Undeterred, he continued to apply at banks, and after working briefly with Continental Bank, he was hired as the first African American male employee of Harris Bank in 1964, and he would remain there until his retirement.

Williams rapidly advanced at the bank, first supervising tellers and later managing the department that worked with African American entrepreneurs. In 1980, Williams was named senior vice president of commercial banking, and in 1991 he was named executive vice president of community affairs. He retired from the bank in February of 2004.

Throughout his career, Williams served as a mentor to those who have sought him out, offering his time and advice to others. He has also been active in the community, serving with the Neighborhood Housing Services (NHS) of Chicago since 1978, spending more than twenty years as a trustee of the Adler Planetarium and currently serving as a trustee of the Art Institute of Chicago. In 2003, Williams was presented with the Gale Cincotta Neighborhood Partnership Award by the NHS. He and his wife, Ana, reside in Chicago.

See how Edward J. Williams is related to other HistoryMakers
Donate Now
Click Here To Explore The Archive Today!