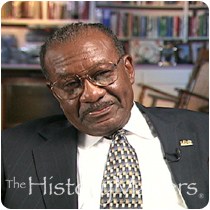 Favorite Color:
None
Favorite Food:
All Food
Favorite Time of Year:
Spring
Favorite Vacation Spot:
Bahamas
Favorite Quote:
I Will Find A Way Or Make One.

Favorite Color:
None
Favorite Food:
All Food
Favorite Time of Year:
Spring
Favorite Vacation Spot:
Bahamas
Favorite Quote:
I Will Find A Way Or Make One.

See how Edward D. Irons is related to other HistoryMakers

Educator and businessman Edward Irons was born in Hulbert, Oklahoma on August 29, 1923. After attending Attucks High School, Irons was drafted into the Navy, and while recovering from rheumatic fever in a V.A. hospital, he and several other patients organized a sit-in to protest segregation in the hospital.

Following his honorable discharge, Irons traveled to Ohio intent on attending Wilburforce University, despite the fact that he had not been admitted nor had his G.I. Bill papers been processed. Nevertheless, he successfully completed his B.S. in business administration, after being unable to obtain an internship in engineering due to prejudice. From there, Irons worked in a hospital as business manager, and then went on to earn an M.A. in hospital administration from the University of Minnesota in 1951. After working a number of jobs, Irons took a teaching job at Florida A&M, but his involvement in the Civil Rights Movement led to him being ostracized by university executives. He left there to earn a Ph.D. from Harvard, where he studied new banks.

In 1964, he and his partners opened Riverside National Bank in Houston, Texas, the first bank given a charter to African Americans in forty years. From there, Irons worked for USAID and served as the founding dean of Howard University’s business school. After leaving Howard, he worked as a consultant to dozens of organizations around the globe, and has been a professor and dean of the business school of Clark-Atlanta University. There, he helped the program to become re-accredited, and he continues to teach there today.

See how Edward D. Irons is related to other HistoryMakers
Click Here To Explore The Archive Today!