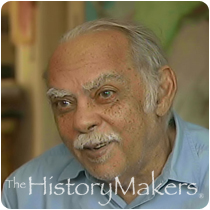 See how Edward Clark is related to other HistoryMakers
Donate Now

Abstract painter Edward Clark was born in the Storyville neighborhood of New Orleans on May 6, 1926. Internationally renowned for over five decades for being a groundbreaking artist, Clark was credited as being the first painter to work on a shaped canvas. Influenced by the sand art techniques of the Pueblo people of the American Southwest, Clark also developed an innovative technique of working with dry pigments.

Clark received his formal training at the Art Institute of Chicago between 1947 and1951; and at L'Academie de la Grande Chaumière in Paris, France in 1952. Clark was heavily influenced by two of his instructors, Louis Ritman at the Art Institute of Chicago, and Edouard Goerg at the Grande Chaumière, though Nicolas de Staël's painting The Football Game is often credited with having the largest impact on his artistic vision.

After his five year stay in Paris, Clark returned to the United States, where he moved to New York City. It was in New York that Clark became involved with the Brata Gallery on Tenth Street. At the Brata, Clark worked and exhibited alongside such artists as George Sugarman, Sal Romano, Al Held, John Krushenick, and Ronald Bladen. While associated with the Brata, Clark first worked with the shaped canvas medium, which he exhibited in the Brata Gallery Christmas Group Show in 1957; a later painting using this shaped canvas method was acquired by the Art Institute of Chicago for their permanent collections.

Throughout his career, Clark also became known for utilizing a push broom technique of painting, which allowed him to sweep large quantities of pigment across the painting surface; boldly manifesting his visions onto canvas. Clark received several awards for his work, and his pieces were collected by museums internationally.

Edward Clark was interviewed by The HistoryMakers on August 23, 2005.

See how Edward Clark is related to other HistoryMakers
Donate Now
Click Here To Explore The Archive Today!