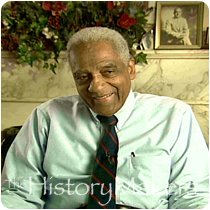 See how Edgar Duncan is related to other HistoryMakers

Accomplished pharmacist Dr. Edgar Newton Duncan was born on February 1, 1932 in Monessen, Pennsylvania to Willie and William Duncan. Duncan’s father worked as a tailor in the first tailor shop in Monessen. Duncan’s mother, graduated from the Tuskegee Institute, became a teacher, married and passed on her love of learning to her six children. Excelling in school, Duncan knew that he wanted to go to college. After graduating from high school as class valedictorian, Duncan went on to Duquesne University.

In 1954, Duncan would be the only black student in his class to graduate from Duquesne University with a B.S. degree in pharmacy. He graduated magna cum laude. At Duquesne University, Duncan would meet Lauraine Thorne, and the two would get married in 1954. In 1956, Duncan became the first black student to graduate with his M.S. degree in hygiene from the University of Pittsburgh’s Graduate School of Public Health (GSPH). Duncan began working in the U.S. Public Health Service’s Commissioned Officers Corps, and in 1972, he became the first pharmacist to be promoted to surgeon general. After returning as Associate Dean of GSPH, he began to work with Pitt’s Partners in Education Consortium and other programs to encourage black and other minority youth to pursue health professions. These programs have made a difference for many young minority students.

In 1990, Duncan earned his Ph.D. in higher education administration from the University of Pittsburgh School of Education. He and his wife raised three sons and sent them all to college.

Duncan was interviewed by The HistoryMakers on August 13, 2008.

See how Edgar Duncan is related to other HistoryMakers
Click Here To Explore The Archive Today!