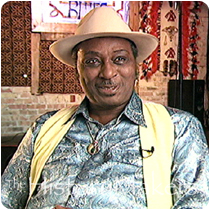 Born Edward Harrington on January 10, 1935, in Macon, Mississippi, Eddy "The Chief" Clearwater has become one of blues music's most enduring and original performers. As a child, Clearwater worked on the family farm and spent many hours listening to music ranging from country to gospel to the blues. While still in his teens, the family moved to Birmingham, Alabama, where Clearwater first learned to play the guitar and began backing various gospel groups in the area.

At the bidding of his uncle Houston, Clearwater traveled north to Chicago and the blossoming blues scene in September of 1950. Working by day, Clearwater spent his evenings in blues clubs, listening to such legends as Muddy Waters and Sunnyland Slim. By 1953, Clearwater was performing in clubs in Chicago, including the Happy Hope Lounge and Mel's Hideaway. In 1958, Clearwater cut his first single, and the following year he made his television debut on Bandstand Matinee. His star quickly rose, and he continued to record and perform throughout the 1960s and 1970s, fulfilling his childhood dream of being able to play guitar full-time. In the mid-1970s, Clearwater embarked on his first European tour, traveling with fellow blues men Buddy Guy, Junior Wells and Jimmy Johnson. In 1987, Clearwater was picked by the U.S. government to do a diplomatic tour of performances in Africa.

Since then, Clearwater has continued to tour, returning to Europe on several occasions, as well as performances in South America and throughout the United States. He also continues to record and self-produce albums on his record label, Clear Tone. Throughout the course of his career, Clearwater has performed with many of the legends of blues, and he continues to break new ground with his own sounds.