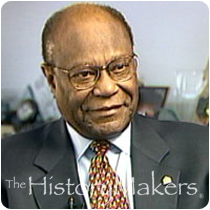 See how Eddie Williams is related to other HistoryMakers

Without ever holding public office, Eddie N. Williams worked his way into becoming an influential part of United States' governmental affairs. Born in 1932, Williams was raised solely by his mother following the death of his father, who was a jazz and blues pianist on Memphis' Beale Street. After earning his journalism degree from the University of Illinois in 1956, Williams tried to get a job at the down state Illinois paper where he had worked part time in school, but was rejected when the paper's owner refused to hire African Americans.

Williams returned to his hometown of Memphis and took a job as managing editor of the Star-Times, a new black newspaper. Williams served briefly in the Army, and later worked as a reporter in Atlanta, before receiving a Congressional fellowship to work under Senator Hubert H. Humphrey in 1960. Williams utilized his Washington connections to gain a job as a Foreign Service reserve officer with the State Department, where he worked for seven years. In 1968, Williams took a job at the University of Chicago as director of the Center for Policy Study; five months later he became vice president for public affairs at the university.

In 1972, Williams left his job at the University of Chicago to become president of the Joint Center, then a young, small, operation in downtown Washington, D.C. Under Williams's leadership, the Joint Center earned a reputation as an outstanding policy think tank. The nonpartisan Joint Center examines public policy issues affecting African Americans, and is one of the few institutions to examine African Americans as a separate entity. Because of the way it operates, the Joint Center has developed a close partnership with the Congressional Black Caucus and retains formidable policy making clout.

For his work in shaping the legislative landscape on matters of policy concerning blacks, Williams received several awards and honorary degrees. The National Journal named Williams one of the 150 outsiders who have had the greatest impact on the federal government, and in 1988 Williams was named a recipient of a prized MacArthur Foundation Genius Grant. An active member of several professional and civic organizations, Williams served as vice chairman of the Black Leadership Forum. Williams and his wife, Jearline, raised three children.

See how Eddie Williams is related to other HistoryMakers
Click Here To Explore The Archive Today!