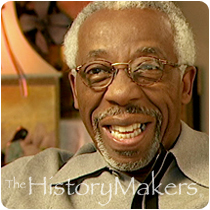 See how Eddie Thomas is related to other HistoryMakers
Donate Now

Born on November 5, 1931, Eddie Thomas was destined to succeed. In 1957, while attending a local talent show at the Washburne Trade School in Chicago, he met and was asked to manage two vocal groups, The Medallionaires and The Roosters. Moved by their unique sound, Thomas convinced members of The Roosters to change their name to The Impressions and the group's career skyrocketed with the release of their first single, "For Your Precious Love."

Thomas would also find another great talent in the person of Curtis Mayfield, with whom he enjoyed a long association. Together they formed Curtom Records and produced many hit records, including "Keep on Pushing," "Amen" and "It's All Right.” The multitalented Thomas continued to produce new artists and shepherded groups, such as The Independents, to fame. Their first release, “Leaving Me,” sold more than 1 million records.

In the mid-1970s, he created Thomas Associates, a successful record promotion business whose elite list of clients included Ray Charles, Barry White, Quincy Jones, the Stylistics and Johnny Taylor. Later, he formed A-1 Creative Productions company, which produced the video and wrote the theme song for the 1987 NFL World Champion New York Giants. In 1994, Thomas was bestowed broadcasting's highest honor, the prestigious George Foster Peabody Award, for his role in the music documentary, The Rise and Fall of Vee-Jay Records. In 2003 Thomas was twice honored, receiving an Award of Honor at the 22nd Annual Chicago Music Awards and a Black Heritage Award from the DuSable Museum.

In February 2005 and July 2006, Thomas was awarded Outstanding Achievement in Poetry from the highly prestigious International Society of Poets. Held at Walt Disney World in Orlando, Florida, Thomas presented some of his poetry to critical acclaim. He is also the recent recipient of the National Newspaper Publishers Association Music Legacy Award. On August 19, 2005, Thomas received the “Portrait of Achievers” Award from the Probation Challenge, and on October 27, 2006, Thomas was inducted into Wendell Phillips Academy High School’s Hall of Fame. Thomas is featured in the 2008 edition of Who’s Who in America.

See how Eddie Thomas is related to other HistoryMakers
Donate Now
Click Here To Explore The Archive Today!