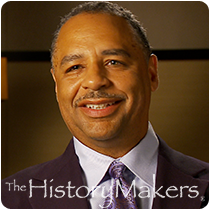 See how Ed Gordon, III is related to other HistoryMakers

Broadcast journalist and talk show host Edward Lansing Gordon III was born on August 17, 1960 in Detroit, Michigan. His father, Edward Lansing Gordon, Jr., was a school teacher and a gold medalist in the 1932 Summer Olympic Games; his mother, Jimmie, was also a teacher. Gordon graduated from Cass Technical High School in 1978 and received his B.A. degree in communications and political science from Western Michigan University in 1982.

Gordon first worked as a production assistant for WTVS in Detroit, Michigan from 1983 to 1985. In 1986, he was hired as host of the weekly talk show, Detroit Black Journal. That same year, Gordon became a freelance journalist for Black Entertainment Television (BET) and in 1988, was named anchor of the weekly program BET News, which covered African American social issues and popular culture. In 1996, he joined NBC News as a contributor to Dateline and Today and hosted the MSNBC talk show Internight. Gordon also became the first journalist to interview former National Football League star O.J. Simpson since Simpson was acquitted of murder in 1995. In addition, he has interviewed Presidents Barack Obama and Bill Clinton, Oprah Winfrey, Beyonce, R. Kelly, Jamie Foxx, Halle Berry, Minister Louis Farrakhan, Senator Trent Lott, Steve Harvey, Janet Jackson and Michael Jackson, among others.

In 2001, Gordon took over as host of the nightly news program, BET Tonight. He became a correspondent for the CBS News program 60 Minutes II in November 2004, and began hosting a daily public affairs program on National Public Radio called News & Notes in 2005. Gordon was then named host of the syndicated talk show Our World with Black Enterprise in September 2006, and returned to BET in 2010 as host of Weekly with Ed Gordon. He subsequently founded Ed Gordon Media, a multi-service production company, where he serves as president, and became host and executive producer of the nationally syndicated Conversations with Ed Gordon and Weekend with Ed Gordon.

Gordon has received an Emmy Award, the Journalist of the Year Award from the National Association of Black Journalists, and an NAACP Image Award. He was named to People magazine’s “50 Most Beautiful People in the World” list in 1996, and was nominated to the Alumni Academy of the Western Michigan University School of Communication in 2006. Also, in 2009, Gordon established Daddy's Promise, a nonprofit that celebrates the bond between African American men and their daughters.

Gordon is married to Leslie Gordon. He has one daughter, Taylor, and two stepchildren, Stephen and Landon.

Ed Gordon was interviewed by The HistoryMakers on June 24, 2014.

See how Ed Gordon, III is related to other HistoryMakers