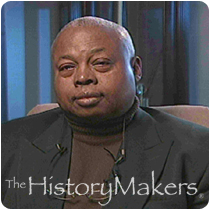 See how Ed Bullins is related to other HistoryMakers

Award-winning playwright Ed Bullins has been a force in American theater for more than thirty-five years. Born on July 2, 1935 in Philadelphia, Pennsylvania, Bullins attended Philadelphia public schools before he dropped out of Benjamin Franklin High School because he found it unchallenging. After joining the U.S. Navy in 1952, he won a lightweight boxing championship and started self-study through correspondence courses. In 1989, he earned his B.A. degree in English and playwriting from Antioch University in San Francisco, California. Bullins then received his M.F.A. degree from San Francisco State University in 1994.

In 1958, Bullins moves to Los Angeles, earned his general education diploma, and attended Los Angeles City College. Moving to San Francisco in 1964, Bullins entered a college writing program. In 1965, his plays How Do You Do, Dialect Determinism and Clara’s Ole Man were staged at the Firehouse Repertory Theatre in San Francisco. With poet Amiri Baraka, Bobby Seale, Huey Newton and Eldridge Cleaver, Bullins founded the cultural and political organization Black House and worked as its cultural director. Later, he served as minister of culture for the Black Panther Party.

In 1967, Bullins started his six-year association with Robert McBeth’s New Lafayette Theatre in New York City and he became its playwright-in-residence. Also the editor of Black Theatre magazine, Bullins wrote and produced many plays during his time at the Lafayette.

Winner of the 1968 Vernon Rice Drama Desk Award for plays performed at the American Place Theatre in New York, Bullins also won the 1971 Obie Award for distinguished playwriting and the Black Arts Alliance Award for his plays The Fabulous Miss Marie and In New England Winter. Bullins earned Guggenheim Fellowships for playwriting in 1971 and 1976 and grants from the Rockefeller Foundation and the National Endowment for the Arts. In 1995, Bullins was appointed as a professor of theater and a distinguished artist-in-residence at Northeastern University.

See how Ed Bullins is related to other HistoryMakers
Click Here To Explore The Archive Today!