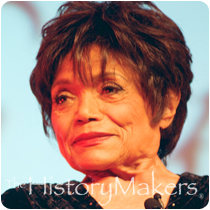 See how Eartha Kitt is related to other HistoryMakers

Eartha Kitt was an international star who gave new meaning to the word versatile. She distinguished herself in film, theater, cabaret, music, and on television. Kitt was one of only a handful of performers to be nominated for a Tony (three times), a Grammy (twice), and an Emmy Award (twice). She enthralled New York nightclub audiences during her extended stays at the Café Carlyle. These intimate performances have been captured in, Eartha Kitt, Live at The Carlyle.

Eartha Mae Kitt was born on January 17, 1927. She was ostracized at an early age because of her mixed-race heritage. At eight years old, Kitt was given away by her mother and sent from the South Carolina cotton fields to live with an aunt in Harlem. In New York, her distinct individuality and flair for show business manifested itself, and on a friend's dare, the shy teen auditioned for the famed Katherine Dunham Dance Troupe. She won a spot as a featured dancer and vocalist, and before the age of twenty, toured worldwide with the company. During a performance in Paris, Kitt was spotted by a nightclub owner and booked as a featured singer at his club. Her unique persona earned her fans and fame quickly, including Orson Welles. Welles was so taken with her talent that he cast her as “Helen of Troy” in his fabled production of Dr. Faust.

Back in New York, Kitt was booked at The Village Vanguard, and soon spotted by a Broadway producer who put her in New Faces of 1952, where every night she transfixed audiences with her sultry rendition of “Monotonous.” Her show stopping performance in New Faces of 1952, which ran for a year, led to a national tour and a Twentieth Century Fox film version.

Broadway stardom led to a recording contract and a succession of best-selling records including “Love for Sale,” “I Want to Be Evil,” “Santa Baby,” and “Folk Tales of the Tribes of Africa,” which earned her a Grammy nomination. During this period, she published her first autobiography, Thursday’s Child. Kitt then returned to Broadway in the dramatic play Mrs. Patterson, and received her first Tony nomination. Other stage appearances followed, as did films including The Mark of the Hawk with Sidney Poitier, Anna Lucasta with Sammy Davis, Jr. and St. Louis Blues with Nat King Cole.

Singing in ten different languages, Kitt performed in over 100 countries and was honored with a star on The Hollywood Walk of Fame in 1960. In 1966, she was nominated for a primetime Emmy Award for her role in the series, I SPY. In 1967, Kitt made an indelible mark on pop culture as the infamous “Catwoman” in the television series, Batman. She immediately became synonymous with the role and her trademark growl became imitated worldwide. In 1968, Kitt's career took a sudden turn when, at a White House luncheon hosted by Lady Bird Johnson, she spoke out against the Vietnam War. For years afterward, Kitt was blacklisted in the U.S. and was forced to work abroad where her status remained undiminished.

In 1974, Kitt returned to the United States with a triumphant Carnegie Hall concert, and in 1978, she received a second Tony nomination for her starring role in the musical, Timbuktu. Kitt's second autobiography, Alone with Me, was published in 1976, and I’m Still Here: Confessions of a Sex Kitten was released in 1989. Her best-selling book on fitness and positive attitude, REJUVENATE! (IT'S NEVER TOO LATE), was released by Scribner in May 2001.

Live theater was Kitt's passion. In 2001, Broadway critics singled her out with a Tony and Drama Desk nomination for her role as “Dolores” in George Wolfe's The Wild Party. Kitt has starred in National Tours of The Wizard of Oz and Rogers & Hammerstein's Cinderella. In December 2003, Kitt dazzled Broadway audiences as “Liliane Le Fleur” in the revival of Nine, The Musical. In December 2004, she appeared as “The Fairy Godmother” in The New York City Opera production (Lincoln Center) of Cinderella. She also starred in the off-Broadway production of Mimi Le Duck (2006) and The Westport County Playhouse production of The Skin of our Teeth (2007).

Kitt's distinctive voice enthralled an entirely new generation of fans. Young fans loved her as “Yzma,” the villain, in Disney's animated feature The Emperor’s New Groove (2001 Annie Award for Best Vocal Performance /Animated Feature). Kitt was also featured in the sequel, The Emperor’s New Groove II, and reprised the role in the popular Saturday morning animated series The Emperor’s New School, for which she received a 2007 and 2008 Emmy Award for Outstanding Performer in an Animated Program and a 2007 and 2008 Annie Award for Best Vocal Performance in an Animated Television Production.

In February 2007, Kitt returned to London after a fifteen year absence for a remarkable series of sold-out performances at The Shaw Theater. She returned to Great Britain in 2008 to headline the prestigious Cheltenham Jazz Festival.

Kitt performed for the last time publicly for The HistoryMakers’ An Evening With Eartha Kitt. She passed away on December 25, 2008 at the age of 81. Kitt is survived by her daughter, Kitt Shapiro, and four grandchildren.

Kitt was interviewed by The HistoryMakers on September 20, 2008.

See how Eartha Kitt is related to other HistoryMakers
Click Here To Explore The Archive Today!